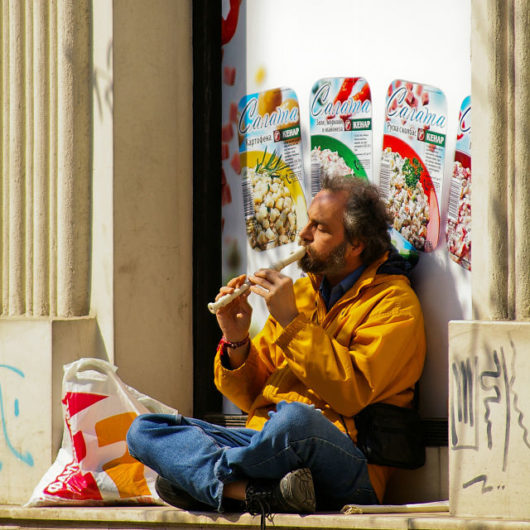 There are no concrete numbers or official statistics that show how many people are homeless and what is the real situation with homelessness in Bulgaria. However, there is a trend that can be observed – the numbers are increasing. As of 2013, as many as 1,370 people have been registered in temporary accommodation facilities. The real number is likely much higher since this only accounts for people with government-issued IDs who have signed up in those facilities.

There are many reasons and circumstances that lead to people losing their home. The most vulnerable groups of people that end up without shelter are refugees, the Roma minority, elderly people who have become a burden to their families or young adults who have previously been in foster home facilities.

Most of the participants of a survey that Urban Nomads, a project that is aiming at improving living conditions for the homeless in Bulgaria, conducted stated that what they really hope for is a job and a place to stay, contrary to stereotypes some still believe in. The organization believes in the value that homeless people can give to society and are dedicated to helping them by constructing tiny portable houses from recycled materials. People do not just choose to live on the streets and those who are in that situation have been through a lot to end up like that.

Bulgaria is one of the poorest countries in the European Union. According to Eurostat statistics from 2015, 40 percent of the country’s citizens live at risk of poverty or social exclusion. In 2013, there were 13 centers for temporary accommodation in the country that served 442 people, as well as six shelters and 13 centers for homeless children.

The policies designed to tackle the problem operate mainly on the municipal level but there are problems that prevent their success. The major issue with the social services available is the lack of adequate funding and good financial management. To add to this, the coordination and project management also need improvement. As a result, the needs of people exceed what is provided by the country, affecting homelessness in Bulgaria.

Winter, the most difficult time for people who live on the streets, is here,  and there are several initiatives that aim to alleviate homelessness in Bulgaria in these times. Caritas is a nonprofit organization that works with homeless people in Bulgaria. Their goal is to help those who are most vulnerable: refugees, migrants, the elderly and the homeless are helped to lead a fair and dignified life. Along with social centers in major cities they provide mobile services- domestic care for elderly and support for people on the streets. Caritas has helped over 4,000 people in Sofia and provides food, hygiene kits, medicine and assistance.

There are also other initiatives. In Sofia, a restaurant will donate food to those who are in need during the winter. Volunteers from the Bulgarian Red Cross opened a winter dining room in the town of Ruse. They expect to provide warm meals, a bath and clothes to around 40 people in need every day. In Pernik, two rooms from the hospital will be given to homeless people during the cold months, according to the mayor. Dobrich opened the doors to its house of temporary accommodation. The house for homeless people will be open 24 hours a day and has the capacity to house eight people.

These organizations and initiatives, along with government activities, help people who do not have access to the basics of living a dignified life and improve the situation of homelessness in Bulgaria. And truly, everything to make these people suffer less helps, but the issue of homelessness should be tackled on a more structural level by reintegrating these people into society and helping them find a sustainable way of providing for themselves.