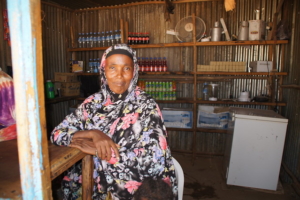 Famine entails a widespread and extensive scarcity of food, attributed to a “triple failure” of food production, access to food and political response by governments and international donors.

According to the U.N.’s five-step scale of Integrated Food Security Phase Classification, famine (Stage 5) requires that “more than two people per 10,000 die each day, acute malnutrition rates are above 30 percent, all livestock is dead and there is less than 2,100 kilocalories of food and 4 liters of water available per person per day.”

By the time the U.N. declares a Stage 5 situation, there has already been massive loss of life. From 2010 to 2012, Somalia was gripped by a crippling famine that killed nearly 260,000 people. Half of these deaths were children under the age of five.

Somalia was devastated by a two-year drought, which caused reduced harvests, food inflation and a steep drop in labor demand and household incomes. The country had already been suffering from high levels of malnutrition and child mortality, but the drought skyrocketed numbers even further. It also killed off valuable livestock, the only assets many families possessed.

But what turned a natural drought into a man-made catastrophe was the inability of Somalia’s government and donors to tackle the issue of chronic poverty. There was already a serious lack of development and investment in basic infrastructure. During the famine, healthcare professionals reacted too slowly and the government itself was in shambles.

Somalia has been entangled in a civil war for the past two decades, and the subsequent violence and upheaval have greatly contributed to the famine.

During the 2010 to 2012 famine, the Islamist group al-Shabaab was at war with the government. Another factor was that the United States—Somalia’s main source of food aid—had discontinued their supply of aid in 2009 to avoid providing food to al-Shabaab.

Since the civil war began, and after an inadequate U.S.-led intervention attempt, the West largely withdrew from Somalia’s affairs. Having failed to stabilize the state and provide the needy with food, a worrisome pattern emerged. Humanitarian aid and food relief were only brought into Somalia with the permission of local war lords or clans, who used violence to control access to resources.

The U.S. withdrawal of aid in 2009 also pressured international aid organizations to do the same, because they feared U.S. backlash should they continue to provide food or supplies.

The U.N. first declared famine in Somalia’s Southern Bakool and Lower Shabelle regions—both controlled by al-Shabaab. The militant group denied that there were any food shortages whatsoever, forbade famine victims from fleeing the country and banned international aid agencies from operating within its territories.

The Obama administration responded by providing waivers to aid organizations to protect against prosecution. This shifted all blame of food aid blockages to al-Shabaab, which subsequently led to a sharp drop in public support for the group. Bereft of support and power, Al-Shabaab withdrew from the capital city of Mogadishu, which they had occupied since 2008.

The U.N. declared the Somali famine over in February 2012. However, the strain on al-Shabaab and similar organizations continues to grow as people demand more access to food aid. Ethiopia and Kenya have considered training Somali militia to fight al-Shabaab and other terrorist organizations, but this could prove to be a dangerous move in such a conflict-ridden country.

In the 21st century, the public has the ability to completely eradicate famine, and has done so on every continent except Africa. In order to fight famine successfully, a variety of steps must be taken. More funding must be invested in African food production to prevent droughts from completely annihilating crops. There must be more support for farmers and pastoralists to raise hardier crops with cheaper inputs and learn about risk management in the case of a disaster. More aid must also go to infrastructure investment and fortification of unstable markets.

Currently, emergency aid is vital to helping Somalians gain a foothold after this devastating famine. However, effort must also be made to examine the root causes, in order to prevent similar disasters from occurring in the future. The world was slow to act on warning signs this time, but with greater long-term investment, Somalia has the potential to deal with droughts and natural disasters effectively and without external aid.