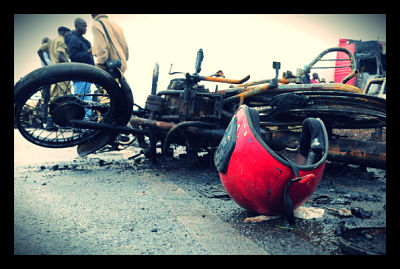 Traffic accidents account for 1.24 million deaths globally every year while estimates put that number at 3.6 million by the year 2030. In developing countries, this projection would put traffic deaths ahead of HIV/AIDS, tuberculosis, malaria and many other common causes of death, according to a Global Burden of Disease study.

Those dying in road accidents are typically young, male and living in poverty.

Roughly 50% of global traffic fatalities occur in developing countries, and according to Jose Luis Irigoyen, a World Bank traffic safety expert, the costs of such a high number of road deaths are a “poverty-inducing problem.”

He estimates that low and middle income countries lose 1 to 3% of their GDP on road fatalities, which Irigoyen says could counterbalance the billions given in aid money to these developing nations.

The UN General Assembly in 2010 adopted a resolution that established a “Decade of Action for Road Safety,” its goal to stabilize the number of road fatalities and then reduce them as much as possible. The resolution estimates that 5 million lives could be saved during this time.

Moreover, a surge in motorcycle use has largely contributed to a massive increase in the number of road deaths—from about 8,000 per year in 2002 to over 16,500 in 2007, and doubling once more in 2010. Motorcycles accounted for 60% of those fatalities.

Benmaamar asserts, “You reach a tipping point when these deaths are perceived not as something accidental, but as a result of a problem that has to be tackled. Only then will you see the fatalities start to drop. Indonesia has not reached that point.”

Experiencing even more road deaths per day than Indonesia is Nigeria, which has the worst driving figures in Africa. There are about 34 road-related deaths for every 100,000 people in the country, according to a 2013 World Health Organization report.

Nigeria’s Federal Road Safety Commission points to high speeds as the culprit behind so many traffic fatalities, though poorly maintained roads, loosely obeyed traffic laws and lax driver’s license requirements contribute to making the country one of the most dangerous places in the world in which to drive a vehicle.

On another note, traffic accidents cause three times more deaths in Colombia than its internal armed conflict. However, the country’s situation has improved over the years. Since the mid-1990s, road fatalities and accidents have decreased significantly, falling from 7,847 deaths in 1995 to 5,502 in 2010. Progress appears to be stalled, however, as fatalities in 2012 increased by 3% from the previous year.

With a goal of achieving better outcomes by 2016, Colombian leaders have begun to focus on addressing and rectifying the nation’s top cause of traffic-related fatalities—motorcycles and their passengers, accounting for 70% of road deaths in Colombia.