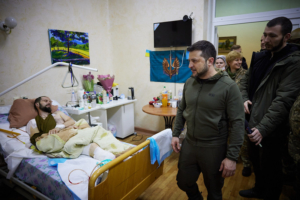 Months of war leaves a health crisis in Ukraine and its healthcare system strained to provide proper healthcare to the citizens. As many healthcare facilities are destroyed and many more are overwhelmed with the number of patients, healthcare workers work long hours treating patients with short-term to long-term illnesses like HIV, tuberculosis and polio.

World Health Organization Director-General Dr. Tedros Adhanom Ghebreyesus stated that “this war has gone on for 100 days too many,” as the war in Ukraine is “shattering lives and communities and imperiling the short- and long-term health of Ukraine’s people”.

The HIV virus affects the immune system and leads to AIDS if untreated. Even before the war started, Ukraine suffered an epidemic of HIV, with an estimated 250,000 people diagnosed and many more not realizing they have the virus. HIV is more common among people who struggle with drug addiction and sex workers, in other words, people living on the marginalized side of society.

USAID provides support and services to treat people with HIV. However, with the ongoing war and the health crisis in Ukraine, it is hard for patients to get tested for HIV or receive the proper treatment.

Tuberculosis is a bacterial disease in the lungs with about 33% of cases connected with drug use. Meanwhile, only 76% of patients receive successful treatment for the disease, with the remaining 24% not completing or receiving their treatment too late. Additionally, some TB victims are asymptomatic, causing the disease to spread rapidly.

Because of the war and the COVID-19 pandemic, the rate of detecting TB dropped. TB is one of the leading causes of death of HIV patients, and because of the health crisis in Ukraine, TB can spread easily and cause more deaths.

Similar to HIV, Ukraine experienced an outbreak of polio before the Russian invasion. Polio is a virus that affects the spinal cord that can lead to paralysis or even death. Children under the age of five are especially vulnerable to the virus.

Vaccination is possible, but the Russian invasion interrupted a campaign to vaccinate children against the virus. Even so, vaccination rates for polio are under 50% in Ukraine. Areas similar to Kharkiv, Ukraine’s second-largest city, have struggled to combat polio due to a lack of vaccination.

Before the war started, Ukraine was on a path of progress with health care. In 2014, the Ministry of Health implemented the National Strategy on Health to help improve the quality of health. However, the ongoing war halted progress as hospitals and health care services were destroyed.

Because of the health crisis in Ukraine, WHO increased its presence in Ukraine and in countries with refugees. Since the start of the war, Ukraine confirmed over 260 attacks on their healthcare system as of June 2.

“WHO is doing everything we can to support Ukraine’s Ministry of Health and deliver essential medical supplies and equipment,” Ghebreyesus said. “But the one medicine that Ukraine needs most is the one that WHO can’t deliver – peace. We call on the Russian Federation to end the war.”

To meet the needs of the health crisis in Ukraine, WHO appealed to the U.S. for $147.5 million. WHO wants to use $80 million to provide support to the people still in Ukraine and an additional $67.5 million to support countries with refugees.

Even though Ukraine is experiencing a health crisis as a result of the Russian invasion, international organizations similar to the WHO provide medical support while also advocating for monetary support to the U.S. government.

Football for the Goals: The UN Teams with UEFARenewable Energy in North Korea
Scroll to top