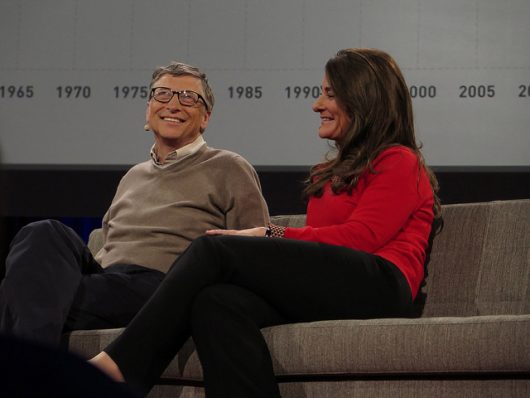 The recently published Bill and Melinda Gates Foundation report entitled ‘Goalkeepers: The Story Behind the Data’ seeks to highlight the progress made by public health workers and governments around the world in the fight against poverty and infectious diseases. The Foundation plans on publishing a Goalkeepers report every year until 2030. Their main objective is to demonstrate that investments in the fight against global poverty truly do have an impact, thus fighting skepticism of foreign aid. This year’s report puts the progress in this area in perspective; contrary to what seems to be a prevailing pessimism about the state of the world, the 2017 Goalkeepers report clearly demonstrates that the “world is better now than 25 years ago”.

The report uses 18 data points from the U.N.’s Sustainable Development Goals, signed in 2015 by world leaders, that are particularly relevant to health and well-being, such as infant mortality and vaccination. Although improvement is stagnating, a majority of the indices show great improvement in the last two decades. Since 1990, more than 100 million lives of children five years or younger have been saved. The rate of infant mortality per 1,000 has dropped from 85 to 38. Maternal deaths have fallen from 275 per 100,000 live births to 179 in 2016.

The report shows that the world is better now than 25 years ago for a large portion of its most vulnerable members. Under the World Bank definition of poverty (living under $1.90 a day), the global poverty rate has decreased from 35 percent in 1990 to 9 percent in 2016.

In terms of health and the fight against infectious disease, the report also emphatically demonstrates how the world is better now than 25 years ago. HIV, for example, has had a remarkable decline in the past two decades, from 0.6 deaths per 1,000 people to 0.25 in 2016. Smoking rates have also significantly improved around the world. In 1990, 22 percent of people 10 years or older smoked; today, that number has dropped to 16 percent. The most impressive improvement is in widespread vaccination, which the report claims is “one of the most impressive public health stories in global health”. 89 percent of target populations have been covered by the eight major vaccines, compared to 73 percent in 1990.

The Sustainable Development Goals have a 2030 deadline, which is why the Gates Foundation report will be released every year until then. Although the numbers demonstrate that the world is better now than 25 years ago, Bill Gates has expressed some concern over a decline and stagnation in funds directed towards foreign aid and global health, especially in the fight against HIV. The remarkable feat of progress achieved so far by the international community at large should serve as an impetus for continued and increased funding, something the Gates Foundation intends to push for.

Taking Action on Poverty in Africa: Key to the Future SuccessWhy is Guinea-Bissau Poor?
Scroll to top