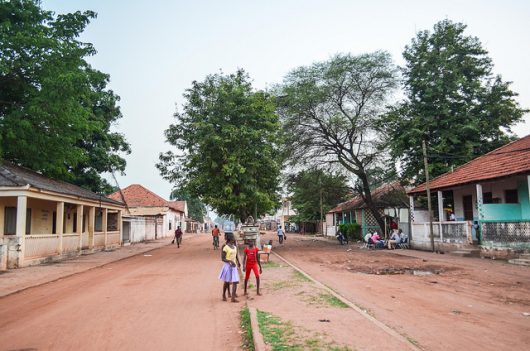 Nationally, nearly 11 percent of households in Guinea-Bissau are food insecure. In certain regions, though, the percentage of food insecure households can reach up to 51 percent. Despite the widespread poverty, real GDP growth is projected to reach an average of five percent during the 2016-2018 period if agricultural output remains robust and political stability is maintained. So, if it is projected to continue its trend of economic expansion, why is Guinea-Bissau poor?

In order to answer the question “why is Guinea-Bissau poor?”, the country’s history of severe political instability must be taken into account. Since gaining independence from Portugal in 1974, there have been four successful coups in Guinea-Bissau, and 16 coups that were plotted, attempted or alleged. There have also been frequent changes in government. Led by Umaro Sissoco Embaló, the current government is the fifth Guinea-Bissau has had since elections in 2014. This political instability has put a strain on the country’s fiscal situation and has hindered growth and poverty reduction. Inefficiencies in public spending further inhibit the flow of resources to regions that require improved service delivery in order to access basic services.

Political instability has particularly stalled the reduction of rural poverty. During the civil war that took place from 1998 to 1999, 300,000 urban dwellers fled to rural areas to escape the conflict. Increased competition for land and subsequent poor harvests have diminished both food supplies and rural livelihoods. The economy has also suffered, as agriculture represents 90 percent of all exports.

Approximately 85 percent of Bissau-Guineans rely on agriculture as their primary source of income. Irregular amounts of rainfall and volatile prices of imported rice and exported cashew nuts have made chronic food insecurity a reality for 11 percent of the population. Food insecurity, inadequate health services and poor water and sanitation have contributed to widespread malnutrition.

The reliance on cashew nuts for economic livelihood leaves nearly two-thirds of the population vulnerable to trade shocks. According to the World Bank, the diversification of Guinea-Bissau’s economy is of the utmost importance, as it will bolster the country’s resilience against potential economic shocks. Moving forward, maintaining political stability and addressing rising inequality will also be key in sustaining and accelerating the rate of poverty reduction.

“Growth has been supported by high cashew prices, increased construction activity, and continued improvements in the supply of electricity and water,” stated Tobias Rasmussen of the IMF. Rasmussen led the IMF team that visited Guinea-Bissau in May 2017 to conduct discussions on the third review of the country’s IMF-supported program. In an end-of-mission press release, Rasmussen added that the improvement of revenue mobilization and the strengthening of expenditure controls would also be integral to the continuation of Guinea-Bissau’s economic expansion.

With a focus on addressing inequality through such means as the enhancement of resource delivery as well as advancements in technology and market support systems, it is the belief of organizations like the IMF and the World Bank that Guinea-Bissau can continue to reduce its poverty rate over the coming years.

Gates Foundation Report: Optimism in the Fight Against PovertyIs it Possible to Reduce the Sint Maarten Poverty Rate?
Scroll to top