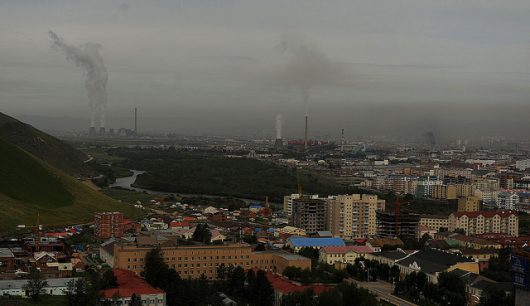 Mongolia is most known for its world conqueror, Chinggis Khaan; yet, within a few generations of his death, Mongolians returned to the steppes in what is current Mongolia and have since undergone political changes — first being subjects of China off and on, and eventually creating its own self governing communist party in the early 1900s.

In 1991, Mongolia changed to a democratic government which sparked new opportunities as well as challenges. Mongolia has taken an unassuming role in world politics in recent history, but with its population increasing and investors hovering, Mongolia is coming into a new place in the world order.

When Mongolia changed from a communist form of government to a democratic government, it actually set the country’s growth back. This was in part because Mongolia relied so heavily on Soviet assistance that when the Union of Soviet Socialist Republics (USSR) dismantled the assistance, it almost immediately disappeared. Since then, Mongolia has really made strides righting itself.

Mongolia is the most sparsely populated nation in the world — the country is six times the size of the United Kingdom, while the U.K. has 21 times its population. Ironically, more Mongols (Mongolians who live in China) live in Inner Mongolia, China than Mongolia itself — 4.2 million versus 3 million.

Low population as well as a semi-nomadic lifestyle for most citizens has put Mongolia at a disadvantage to becoming a world leader; however, as the younger generation comes into adulthood, a call to action is taking place by asking more from their government.

The Gross Domestic Product (GDP) of Mongolia was worth over 11 billion in 2016. From 2011 to 2013, Mongolia saw 10 percent economic growth per year, but its GDP started dropping in 2014. This trend is generally attributed to the Mongolian government signing a mining agreement with private company Rio Tinto for rights to Oyu Tolgoi (OT) which set foreign investors off. Mongolia is growing still, but at a slower rate of just about one percent per year now.

The government relationship with Rio Tinto has sparked controversy with the economic drop and discussion over the disproportionate allocation of profit. Many outside parties believe the profit should be an equal split between Rio Tinto and the government as they are co-owners of the OT mining company. In reality, Rio Tinto receives 70 percent while the government receives 30 percent.

There has been some dispute on these numbers, with Rio Tinto attempting to advertise that the people of Mongolia are winning by walking away with 71 percent of the profit from the mining operation. This debate has spurred many to call for greater transparency in the government so as to expel corruption.

The mining industry brings wealth to the country, but creates few jobs. Most of the jobs in the country (about 35 percent) work in animal husbandry, a sector of farming, which accounts for about 10 percent of the total export income. Almost 7 percent of households own at least one animal, with 69 percent of those being herding households.

About 50 percent of Mongolians population live in gers. This breaks down to about 35 percent of those inside the capital city and 90 percent of those outside it. Gers have been around since Chinggis Khaan’s time, and are ideal for a semi-nomadic lifestyle, easy to put up and take down and well-equipped for the extreme cold of Mongolia. However they obviously don’t have indoor plumbing or electricity, making them the poor man’s option for the city.

Luckily, Mongolia is growing in educational opportunities; for instance, there are school options in the ger districts. Most schools in the area are stocked by non-profit organizations such as The Asia Foundation, Ministry of Education, Culture and Science and Library For All. Those attending school are relatively high in numbers, although the numbers do drop as children go through the education system.

In 2015, the gross enrollment rate in primary education (ages 6-10) was 117 percent (over 100 percent accounting for those repeating or who came later), dropped to 93 percent for lower secondary (ages 11-14). While basic literacy is not a problem, an estimated 18 percent of children drop or are pulled out of school early to assist with work or money for the family.

Overall Mongolia is growing into a new age. It is still strapped down by difficulties of the past, and made some recent poor choices, but the population of Mongolia wants more from its country. This desire will serve as the drive that brings Mongolia onto the world stage.