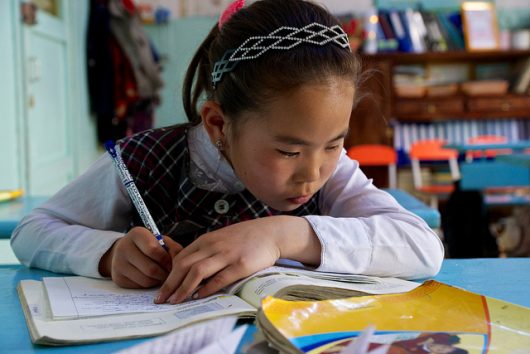 Since its transition from a member of the Soviet Union to an independent state, Mongolia has struggled to maintain its pre-independence levels of educational attainment and literacy. In the absence of a centrally-planned system, education in Mongolia has had to find its own way.

Education in Mongolia faces the following issues: poor quality of curriculum, materials and teacher training, inconsistent standards, low-quality learning environments and conditions and irrelevant vocational programs. Specific parts of the population also face more specific barriers to educational attainment. For example, children with disabilities (especially if they are non-ambulatory) have very few accessible options and the schools which are open to them receive far less funding than “mainstream” schools.

Children from poor, rural communities, such as those in the Khangai and Western areas, are significantly less likely to attend school at all. Ethnic minorities, including Indigenous children, face discrimination and stigma as well as inadequate curriculum and language materials. Despite the 1995 Basic Principles of Education Law – which guarantees all citizens education in their native language – many students such as Kazakh students (who are the largest minority group) do not have access to textbooks written in their native language.

There are many initiatives from within Mongolia and from external nongovernmental organizations looking to improve education in Mongolia. The READ (Rural Education and Development) Project created 3,560 libraries in 383 rural primary schools. This increased classroom reading time by 100 percent.

The Basic Education Program, part of UNICEF, assists the government in the development and implementation of its own education policies. UNICEF also funded upgrades to the Non-Formal and Life-Long Education Center of Nalaikh District, a school that is accessible to children with disabilities (including those in wheelchairs) and provides education to children who would otherwise have to stay home.

An initiative called the Indigenous Peoples Planning Framework has the mandate to recommend changes to the Mongolian Education Quality Reform Project in order to make it more useful to Indigenous children. In its initial form, this reform project would likely not hurt Indigenous children, but it contained no specific measures to help them.

Today, the system of education in Mongolia faces several issues of accessibility and suitability, particularly toward disadvantaged population groups. However, it is on the right path to improving access and quality of education for all.