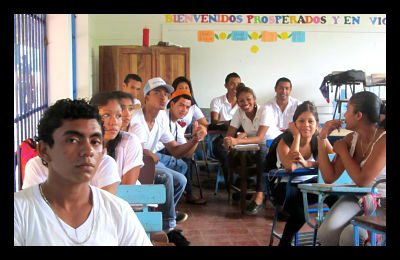 In order to eliminate poverty, the impoverished must be educated. This is the philosophy practiced by Margaret Gullette, co-founder of the Free High School for Adults in Nicaragua. 12 years ago, Margaret, who resides in Newton, Massachusetts and is a resident scholar at Brandeis University, was volunteering in Nicaragua through the Newton-San Juan del Sur Sister City Project when she and another woman, Rosa Elena Bello, decided they wanted to start a literacy program.

“It’s a great story,” Margaret said as she recalled the details. “Rosa was working in a clinic for women and children, and infant mortality rate was not improving.” The two women believed that it would never improve without literacy. It is not enough just to donate money; the people must be educated.

In Nicaragua, one out of 10 people are illiterate, and this figure is even higher among women. The average Nicaraguan has less than five years of schooling and only 29 percent of children complete primary school. Much of this can be attributed to the poverty cycle. Until 1979 a dictator ruled Nicaragua, and dictators rely on ignorance to control the masses.  “Poverty and ignorance should always be put together,” Margaret explained. Because many adults who lived under that dictator’s rule and did not receive an education themselves, not only do they not have enough money to pay for school supplies and uniforms, but they often do not value education.

In order to begin the literacy program, Margaret applied for funding to 25 different grants. She received 24 rejections, but the one acceptance was all the two women needed. At first it was difficult to get Nicaraguan women involved in the program because their lives revolved around housework and children, but in the first three years nearly 300 women received certificates for the completion of sixth grade.

High school in Nicaragua runs from grade 7 to 11, so after the success with the sixth grade program, the next logical step was to continue the women’s education into high school. Once again Margaret found funding in America, and the following year (2002) a free high school for adults opened. 12 people graduated that year and the number has been growing ever since. The high school currently has 800 students and 616 graduates.

Eventually the Nicaraguan government took over the building of the schools, and the 12 communities that have these high schools have better overall health and fewer unwanted pregnancies. What makes the Free High School Program unique is the teaching model adopted by Margaret and Rosa. The schools use feminist textbooks and a modified version of twentieth century educator Paolo Freire’s teaching method.

Freire believed that education was vital to the liberation of the oppressed and did not support the method of teaching in which students are simply empty vessels to be filled with knowledge. For basic literacy, Freire believed in teaching language that is meaningful to people’s lives. He did not have a program for women, so Margaret and Rosa adapted his method to teach the women in Nicaragua. The first word the women learn is “fetus,” which Margaret says is a word every woman should know.

The Free High School program has continued to grow with a technical high school that opened in 2006 in which students can specialize in one of three fields: Management of Tourist and Hotel Enterprises, Accounting and Civil Construction. A number of graduates from both the Free High School and the Technical School have gone on to receive university degrees and other accomplishments.

Margaret believes that “there is always something to do in Nicaragua,” pointing to her husband David’s bio-sand filter project for contaminated water as an example. The next steps in the Free High School project are to buy new textbooks and construct an office building for the organization in Nicaragua. Go here (http://sanjuandelsursistercityproject.wordpress.com/) to learn more about the various Newton-San Juan del Sur Sister City projects, including the Free High School.