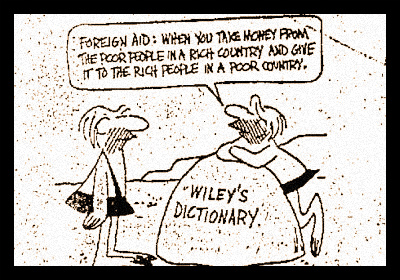 A common refrain from critics of USAID is the lack of benefits they see would come back to the United States. It is hard to see the longterm benefits of these foreign aid programs, especially when things look so bad when they’re shown on the news. For many, it is easy to write off dire circumstances in distant nations as lost causes rather than potential areas of promise. Many fail to see how the United States was once such a seemingly hopeless region.

If the nations of Europe had the mentality that detractors of foreign aid have today, the United States wouldn’t have had a chance in its fight for independence from Great Britain. This decision took place during an era when it was much more difficult to give support to struggling groups from distant parts of the world.

Spain was another country that provided important foreign aid to a developing United States. Spain still had possessions in the Caribbean at the time of the Revolutionary War, making it easy for them to send over supplies to port cities that had been cut off by a British blockade. The goods that Spain was able to supply from such a close outpost helped offset the losses that many Americans were feeling in dealing with the might of the British Empire.

A number of other nations stepped in to help the United States in its struggle. The Netherlands gave some important trade support to help subvert the blockade, and even a number of Indian colonists helped the American cause. This foreign support was a key part to the war, and is arguably undervalued by people today.

While military support is most notable when looking back at this period of foreign involvement in the United States, the supplies and exports other countries provided kept the United States on its feet. It is this type of support for struggling economies that the United States as a superpower should be providing today. The U.S. is in the position to keep others from sinking from the status of a promising democracy into chaos, and organizations like The Borgen Project hope to encourage that type of foreign aid. It just repays the moral debts that the United States benefited from long ago.

Women and Modern Day Slavery in Pakistan Afghanistan: Past and Future
Scroll to top