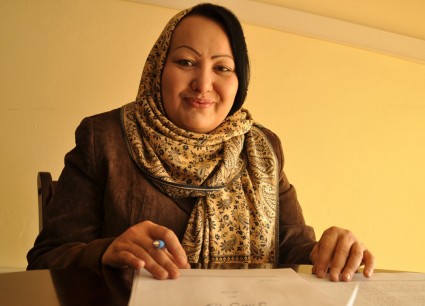 Sadat works to help bring the government closer to the people of Kuhwaja Do Koh in the Jawzjan Province. She feels that it is important to hear the demands of the people. That is why, as part of her work, Sadat is focusing on education and the development of Afghan women. She also came from a poor uneducated family, and it was not until later that she received an education and worked her way into politics.

Since Sadat took office, more women and girls are in school and working than ever before. There are programs out that teach women trades and skills so that they can work outside the home.

For example, Sadat set up the Tailoring and Needlework program. The women’s transport fees are paid and they are provided with the tools they will need; therefore, the women have fewer out-of-pocket expenses that could hinder their education. Each year, the technical school graduates roughly 50 successfully skilled women. Sadat even takes the time to visit the school and check on the conditions.

When Sadat took office in January 2013, there were three schools between 32 villages for over 3,000 school-aged girls. Her office has been working to increase the number of schools and ensure that as many of these girls as possible have access to education.

The women in the community fully support her and her strides to educate women to give them the opportunities to be successful. They feel that by having a female District Governor, Sadat can better relate and provide what the women need. The women already feel like actions are taking place and opportunities are changing for the better.

How to Make Water Drinkable Should I Sign the Up for School Petition?
Scroll to top