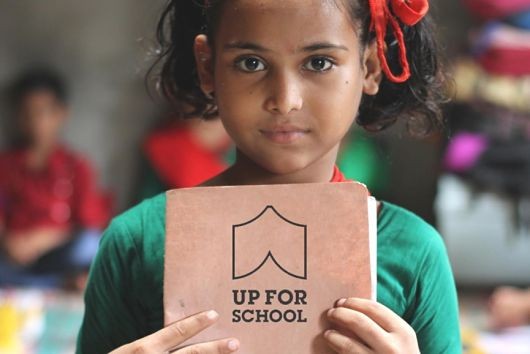 At the time of this posting, eight million people and counting have signed the Up for School Petition. These people want to make sure that children all over the world get an education — a good one. One that will help end the cycle of poverty.

This includes children displaced due to natural disasters or wars. This includes children living in poverty so bad that their parents cannot afford to send them to school, and the children themselves are forced to work. This includes girls who are married off as children or who are unmarried but get pregnant while still of primary or secondary school age or who have their period but no appropriate way to take care of the blood.

Up for School, a petition sponsored by A World at School, demands government leaders to fulfill their promise made at the U.N. in 2000, which guarantees all out-of-school children will be in school before the end of 2015. As Hellen Griberg, A World at School Global Youth Ambassador, reminded world leaders of the Up for School Petition at the Oslo Summit for Education Development on July 7, 2015, “We know that nothing changes without pressure. Therefore, we have been building support in every corner of the world.”

In 2000, 102 million primary school children were out of school. By 2011, the number dropped to 57 million. Progress was being made in developing countries. Primary school enrollment reached 90 percent. Literacy rates were on the rise and gender gaps were narrowing. In 2012, however, the number started rising again to 58 million children out of school. The number is still rising and has now reached 59 million.

Along with this increase in numbers is a decrease in funding. International aid to basic education started falling in 2011 for the first time since 2002. In 2014, only one percent of overall humanitarian aid went to education. Now progress is stalling, placing the 2015 target at great risk.

Yet education is crucial to overcoming poverty. The United Nations Children’s Fund considers education to be critical in achieving all the Millennium Development Goals. Education provides future generations with the tools to fight poverty, disease and gender disparity — all issues that need work in order for the world to improve the environment, the economy and our security. From the midst of today’s primary school children, our future leaders will emerge — our educators, doctors, scientists, economists, heads of state and all the others who will be needed to support a developed world. We may not know them by name now, but one day they will be making decisions about our world.

“Sometimes we wait for others and think that a Martin Luther [sic] should raise [sic] among us, a Nelson Mandela should raise [sic] among us and speak up for us. But we never realize that there are normal humans like us, and if we step forward, we can also bring change just like them,” asserted the Nobel laureate, Malala Yousafzai, on the June 18, 2015 airing of The Daily Show. Yousafzai is the survivor of the Taliban’s assassination attempt in 2012 for openly supporting girls’ right to education.

Why should I sign the Up for School Petition? I cannot think of a reason why anyone should not — or cannot. Most of us may not have had a voice at the Oslo Summit for Education Development on July 6-7, 2015 or at the International Conference on Financing for Development in Ethiopia on July 13-16, 2015. We also will not have the opportunity to speak at the U.N. Summit to adopt the post-2015 development agenda on September 25-27, 2015. What we can do, though, is visit the Up For School Petition website to sign the petition now. I just did. It took three minutes.