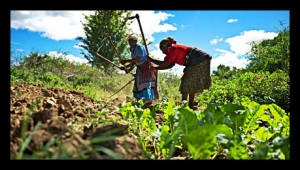 For those in sub-Saharan Africa, or SSA, around 47 percent of people live on less than $1.25 a day. Even more jarring are the statistics on child poverty throughout SSA, represented in a recent paper on deprivation analysis from the UNICEF Office of Research.

The paper defines and analyzes poverty in the form of various deprivations related to health, sanitation, food, water and education. Based on available data from 30 SSA countries, 86 percent of children under the age of 18 live with at least one deprivation. Within that 86 percent, 247 million children live with two or more deprivations, identified as lack of sanitation and poor infant feeding. In addition, 87 million children live with four or five deprivations, which include a lack of sanitation, poor vaccine coverage, unclean water and poor education. While research demonstrates a downward trend in poverty for the majority of the countries in SSA, Rwanda, Mozambique, the Ivory Coast and Guinea continue to see a rise in poverty, and the region is clearly left with pressing needs.

We have the numbers—now what? Some believe that the key to overcoming poverty in SSA is to promote and invest in science. SSA countries are encouraged to focus on scientific research and education to accelerate development and stimulate economic growth. The U.S. Agency for International Development has been a proponent of the initiative, vital to the success of these impoverished areas.

Two recent inventions that aid the poor are simple chlorine dispensers in Uganda, and a texting system that uses codes from prescription medications to ensure authenticity. USAID has taken additional poverty-fighting actions through the establishment of Power Africa, a program that collaborates with the government, private sector and others to allow more access to electricity for the SSA population. A reported 600 million people are without power.

In its regional economic outlook, the International Monetary Fund reported modest positive development in SSA, but also acknowledged that difficulties remain. Progress in the majority of these economies has sparked primarily through agriculture, infrastructure and services, but the widespread Ebola outbreak and security issues in the South Sudan and Central African Republic have left many with dimmed optimism.

Those working toward economic growth in SSA must not only direct their efforts toward scientific research, but also support for a post-Ebola recovery plan and promotion of regional stability. Costing lives and resources, Ebola has significantly hindered the progress of the economy. Tourism is at a notable low, along with manufacturing. The number of agricultural exports has also declined as farmers flee their land in fear of Ebola. Stability remains a challenge for many SSA countries; however, Chad, which has benefited greatly from a continuing era of stability, could serve as a leader on the forefront of peace. Although there has been some improvements to date, the SSA poverty crisis will require a global effort if it is to be ameliorated.