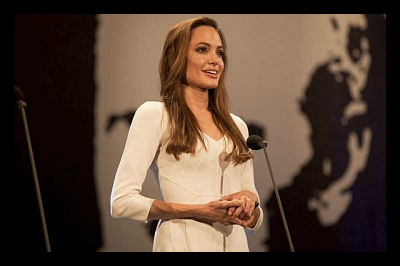 Angelina Jolie is invested in refugee issues, and has been involved with the United Nations High Commissioner for Refugees, also known as UNHCR, since 2000. Her interest and activism in humanitarian affairs began in 2000 when she visited Cambodia to shoot her film “Tomb Raider.” Her dedication to displaced persons, refugees and humanitarian assistance has generated substantial domestic and international attention.

In 2001, she was named a UNHCR Goodwill Ambassador, as she conducted forty field missions to some of the most remote areas of the world. In April 2012, she was appointed as Special Envoy of UN High Commissioner for Refugees António Guterres. According to UNHCR, “In her new and expanded role, she will be focusing on major crises resulting in mass population displacements; undertaking advocacy and representing UNHCR and Guterres at the diplomatic level; and engaging with decision-makers on global displacement issues. Through this work, she will help contribute to the vital process of finding solutions for people displaced by conflict.” Her first mission as Special Envoy was in Ecuador in 2012.

Jolie’s contributions to UNHCR have been tremendous. Not only does she advocate on the behalf of refugees, engage with diplomacy and activities relating to global displacement issues and inspire others, she has also donated over five million dollars to UNHCR since 2001. Jolie continues to bear witness to and support disaster relief, vulnerable children, environmental conservation and international law and justice efforts.

In 2003, she started the Maddox Jolie-Pitt Foundation, which has contributed funds to Namibia, Ethiopia and Cambodia. This foundation includes microcredit programs, rural planning, health care, agriculture, education and infrastructure. She also launched the National Center for Refugee and Immigrant Children, co-chairs the Education Partnership for Children of Conflict, became a member of the influential Council on Foreign Relations and continues to be active in the international community and zones of conflict and instability.

In January 2015, Jolie visited Dohuk, Iraq in pursuits of ending suffering in the region. She met with Syrian refugees and Iraqi citizens of the Kurdistan region, investigating the current humanitarian situation. She reported, “As the conflict in Syria approaches its fifth year, the war in Syria is at the root of so many of the problems faced here in Iraq and across the region. There is an urgent need for international leadership to break the cycle of violence in Syria, and to find a way forward towards a just and sustainable peace agreement.” Her dedication to the cause of refugees, displacement and humanitarianism is indispensable.

Jolie has been recognized for her effective efforts. She was the first recipient of the Citizen of the World Award in 2003, followed by the Global Humanitarian Award in 2005 for her work with refugees. Her efforts were further recognized in 2007, when the International Rescue Committee awarded the Freedom Award to Jolie and High Commissioner Guterres for their contributions to the cause of refugees and human freedom.