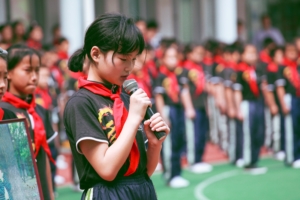 In June 2022, 65-year-old Zhang Guimei escorted her students to China’s annual college entrance examinations, or ‘gaokao,’ for the 12th year in a row. If all goes well, when these students exit the exam room, they will be able to change their fate by passing the metric for college. According to Global Times, however, this would not have been possible if not for Zhang Guimei. Known as the “principal of miracles,” Zhang has sent more than 1,800 girls from the poorest parts of China to college. Not only did she receive one of China’s highest medals of honor for contribution to society, but she has also been written into the official modern history textbook compiled by the government. However, her story is a simple one about an educator who gave her all for her students to change female education in China.

The Story of Zhang Guimei

Zhang Guimei’s husband, who taught with her at a high school in Yunnan, died of cancer in 1994. Two years later, Zhang Guimei herself became ill. Because all her money had gone to treating her husband, she gave up on treatment and kept her illness a secret.

The truth emerged when she fainted in class. Despite their poverty, the people of Huaping county–the teachers, students, villagers and even the local government–all pitched in to raise money for her treatment.

Zhang knew the difficulty with which the money came by. In the early 2000s, Huaping county was extremely poor because its mountainous terrain limited agricultural growth as well as transportation. It was common for parents to pay their children’s tuition five cents at a time, using coins that are no longer popular in larger cities. Even so, they raised enough money for Zhang’s treatment.

During her time there, Zhang noticed a strange phenomenon: many girls who had good grades would suddenly drop out. Later, she realized that they had to withdraw either to work low-paying jobs or get engaged.

At the turn of the 21st century, China was developing at a rapid pace. But Huaping county–and Yunnan province in general–was one of the few areas that remained impoverished. Rural, poor and uneducated, families had no money to pay for school and often prioritized the education of boys over girls. In order to have one less mouth to feed, girls often became engaged or married in exchange for a bride price.

However, Zhang Guimei never stopped believing that developing female education in China was the key to changing the fate of Huaping. In her mind, “if one girl can receive higher education, she can change the fate of three generations.” To tackle the problem at its root, she resolved to establish a free public high school so the girls could have a chance to get the education they deserved.

The path to establishing the Huaping High School for Girls was difficult. Although the government was very supportive, it had no money to sustain the operations of a free high school. Zhang had to ask for donations on the street from 2002 to 2007. Things took a turn when a journalist from Beijing discovered her efforts, and with help from people across the country supporting female education in China, her high school finally opened in 2008.

When the school opened, there was only one building, with no dormitories or even bathrooms. At night, the classrooms turned into dorms that the students and female teachers slept in. Not long after, nine out of 17 original faculty members resigned. To make matters worse, the school had no students as many parents still refused to let their daughters out of the mountains.

Zhang took a very simple approach to this problem. Going from house to house, she promised that the school would do its best to help the child even if they could not finish their education. If colleges accepted the girls but they could not afford it, she would take all financial responsibility. Many parents relented, and the girls were finally able to step toward a future outside of the mountains.

In the past decade, more than 1,800 girls have been able to leave the mountains through Zhang’s high school. More than 40% of the students at Huaping High get into first-rate colleges, and the school has ranked first in the entire Lijiang County for many years.

However, Zhang Guimei’s hard work has taken a toll on her health, with 23 different diseases that plague her. Wearing plain clothes and talking into a cheap megaphone, numerous medicinal patches were on the back of her hands as she escorted her students to the 2022 exams. Yet, the entire Huaping changed because of one educator with a simple wish: to change female education in China. Hopefully, her story will inspire many others to fight for the one wish that will better the world.