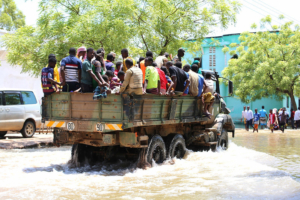 Across the globe there are hundreds of millions of people at risk of severe floods and the situation has only grown worse since the beginning of 2022. Many countries are reducing flood risks or they face billions of dollars of damages and potentially thousands of lives lost or displaced.

Who is at Risk

Floods are one of the most common and devastating natural disasters, and they are estimated to affect as many as 1.81 billion people every year. Of those affected by floods every year, 170 million people live in extreme poverty and the floods only make the situation worse. Natural disasters are estimated to cause more than $300 billion dollars of damage every year, with this number increasing to half a $1 trillion dollars when considering consumption loss, and floods are one of the leading causes. Low and middle-income countries account for 89% of those affected by floods, with most living in Sub-Saharan Africa and Southern Asia.

Since the start of 2022, there have been many devastating floods which have affected the lives of millions. At the beginning of 2022, tropical storm Ana caused floods in developing countries across eastern Africa. The tropical storm hit Mozambique the worst and left 45,000 people in need of humanitarian aid, with 23,000 of them being women and children according to UNICEF.

The issue persists well into 2022 as in recent weeks floods in developing countries like India and Bangladesh have killed 200 people and displaced nearly 7 million people. It is clear that floods are a global issue, as they impact nearly a quarter of the global population, cause hundreds of billions of dollars in damages and displace or even kill the most vulnerable people.

The first major way that countries can reduce their risk of floods is by implementing a Citizen-Based Investment Program (CBI). Small Caribbean Island countries have been using this idea for decades. St. Kitts and Nevis created a CBI program in 1984 that allows rich investors from countries like the United States to invest in the nation’s Sustainable Growth Fund in exchange for citizenship with the nation. This fund is used by the nation to support growth and development within the infrastructure of the island to better protect it from natural disasters and grow its economy back faster after a disaster.

This Citizen-Based Investment Program is a successful industry that has contributed as much as 30% of the GDP in St. Kitts and Nevis in 2020. This specific portion of the GDP has been used over the last few years to create hospitals, hurricane-resistant homes and has even brought money to the education sector. This idea could be implemented in developing countries that are at high risk of floods as the fund contributes to a boosted natural disaster defense for the country and increases its tourism infrastructure just as it was implemented in the Caribbean nations.

The United Nations Environment Programme (UNEP) has created a database that accumulates satellite signals and weather patterns from a multitude of sources that is designed for public use. Local water authorities in these developing countries could use the Flood and Drought Portal database to help make highly accurate predictions about weather patterns that are likely to cause floods.

This program has already been used in countries similar to Senegal with the help of the Global Partnership for Sustainable Development Data to better increase Senegal’s data acquisition and helped advise food policy in the developing country. This data acquisition allowed officials in Senegal to get more accurate measurements for deforestation, floods and droughts which have already helped save people from disaster and famine.

The UNEP has also contributed to reducing floods in developing countries through the implementation of environmental factors that counter the increasing flood risks. The UNEP has created wetlands and increased vegetation in some developing countries which can help reduce the damage caused by floods as these wetlands soak up the flood water and then the water is slowly dissipated.

This idea has been implemented in Comoros, where the UNEP reconstructed 3,500 hectares of watershed habitat which aided the citizens of Comoros in retaining water from floods to be used later by farmers for their crops. The UNEP has been using this system to locate high flood risk regions that are in close proximity to potential wetlands and then using these wetlands to mitigate flood damage.

Although the idea of a world free from flood damage seems far-fetched, the three programs have proven to be highly successful in reducing flood risks. With the devastating floods that have already occurred in 2022, the three implementation programs could make a difference in reducing floods in developing countries.