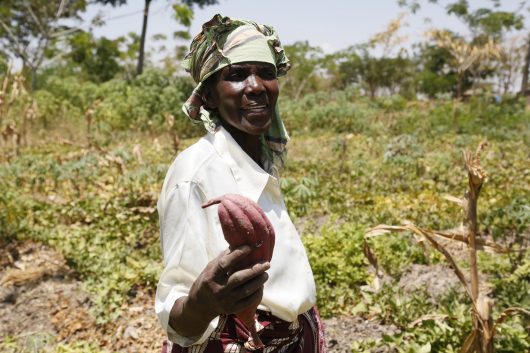 About 800 million people (one in nine) worldwide are still undernourished. Creating food sustainability is a growing need across the globe. In recent reports by the Guardian, Africa could face the worst food crisis since 1985, with 50 million people going hungry.

Even worse, unsustainable farming practices have been destroying fertile lands necessary for food production. Soy production, for example, destroys 55 million tons of topsoil in Brazil each year. Similarly, destructive crops are coffee, palm oil, tobacco, wheat and corn. According to the World Wide Fund for Nature, 30 percent of global arable land has already been degraded.

The practice of raising livestock for meat has contributed to global warming by deforesting areas that would otherwise cleanse the air of carbon dioxide, and by adding methane to the air. Raising livestock also requires the use of massive amounts of water. Agriculture accounts for one-third of global greenhouse emissions and 80 percent of water usage in the US.

Because of the lack of sustainability of many current farming practices, and the need to feed much of the developing world, scientists have proposed new technologies to tackle these challenges. One proposed controversial method of sustainability is in vitro meat production — producing meat in a laboratory.

In theory, the practice would rid the food production industry of all the traditional worries of raising livestock and handling the waste produced. However, the procedure may be extremely energy-intensive in keeping the meat sterile and the process may eventually also contribute to global warming. Once optimized, the world’s growing desire for meat may have the chance to shift to this laboratory product.

Another technology currently under development by NASA is 3D food printing, which would convert basic proteins, carbohydrates and fats into actual foods. The technology could utilize alternative ingredients like insects or algae to source sustainably but also satisfy our specific appetites.

Genetically modified foods (GMOs) have the potential to be sustainable  and help end hunger, although they are also very controversial. In Uganda, the World Bank has helped introduce a non-native, biofortified sweet potato that would combat the stunting of children’s growth and help empower women farmers with economic independence. The sweet potato provides a child’s daily dose of Vitamin A in less than two ounces and gives women the opportunity to grow and sell the food.

While scientists have proposed many ideas for feeding the world in a sustainable manner, public opinion has been the crux to progress. With such bitter backlash to GMOs and other non-natural foods, funding will always be limited. These technologies will have to be supported and developed in the richest nations before they can safely and effectively be implemented for the poorest.