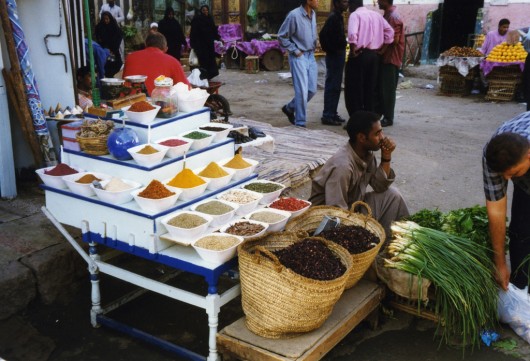 In June 2015, the European Union funded a project for the World Food Programme (WFP) that encourages 100,000 children in Egypt to attend school.

The daily in-school snack, date bars, offers valuable vitamins and minerals for students. For most children, the bars are their first meal of the day. The take-home rations of rice and oil equal the value of what children could earn from a month of work.

By using food incentives, WFP hopes to encourage parents to send children to school instead of out to work. In addition, they hope to break the patriarchal idea where young girls are solely expected to stay home and be married.

“The concept they have is the girl is going to get married and stay home, so if they need to get one of their children educated, they’re going to focus on the boys. With our project, we focus on the girls because we feel we are their chance to get an education,” says Amina Al Korey, communications officer for WFP in Egypt.

The girls get first priority registering for the community schools supported by the WFP and supervised by the Egyptian Ministry of Education. Boys can be admitted but only if spots still remain.

Girls who attend school will make up to 25 percent more in wages in the future, be healthier and more capable of supporting a family, and could even save malnourished children, simply by being given a secondary education.

Al Korey says, “Whenever I speak to the girls, they’re always just so enthusiastic about actually going to school. They don’t just feel good about getting an education and getting a chance to take a different path.”

WFP also plans to support mothers with income-generating projects, such as breeding goats, making soaps and selling and growing vegetables.

At the conclusion of the four-year project, WFP hopes to see more girls excited about pursuing an education and bettering their future.

Philanthropy University Works to Empower Social WorkersP is For Poverty: How Improving Literacy Impacts the Economy
Scroll to top