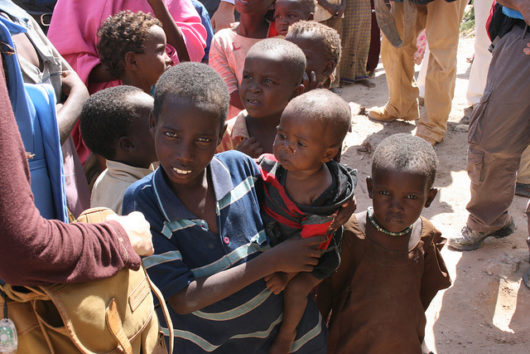 The World Bank has discovered a new approach to helping the 124 million people currently affected by crisis-levels of food insecurity: artificial intelligence.

Three international organizations: the World Bank, the U.N. and the International Committee of the Red Cross, have partnered with three of the world’s largest tech giants: Microsoft, Google and Amazon, in a joint initiative to preemptively address world hunger. The result? It’s called the Famine Action Mechanism (FAM).

What is Famine Action Mechanism?

Launched by U.N. Secretary-General António Guterres on September 23, 2018, in New York, the Famine Action Mechanism seeks to improve international food aid through famine prevention, preparedness and early action. FAM is being created to augment the capability of existing warning systems to effectively distribute aid prior to the emergence of famine. This is being done through the establishment of official procedures that connect early warnings with financing and implementation.

With the cooperation of humanitarian development organizations, tech companies, academia, the insurance sector and, of course, international organizations, this collaborative effort hopes to see success through the investment of a wide variety of stakeholders.

While other forms of famine prediction, like Famine Early Warning Systems Network started by USAID in 1985, already exist, it lacks the ability to give real-time data and requires the hard work of hundreds of employees.

If successful, the Famine Action Mechanism will be the first quantitative modeling process using an algorithm to calculate food security in real time.

Hope is high for executives at Google and Microsoft who have seen the humanitarian power of technology firsthand. Advanced technologies have already proven effective in helping farmers to identify the disease in cassava plants as well as keeping cows healthier and more productive. President of Microsoft, Brad Smith, has expressed that artificial intelligence holds huge promise in forecasting early signs of food shortages.

How is FAM going to be implemented?

Famine Action will be implemented through four steps:

While seemingly slow to take place, the cause of famine, defined as a daily hunger-related death rate that exceeds 2 per 10,000 people, is extremely complex.

The usual suspects of food insecurity like drought and crop production aren’t always the forces that bring a community to famine. Other factors like political instability, inflation or a natural disaster have the potential to significantly alter a community’s food supply. Additionally, nine of the last 10 major famines were triggered by conflict and war.

The uncertainty around when and how an undernourished community shifts into a crisis of famine adds to the importance of preemptive action for food insecurity and the demonstrated need for the Famine Action Mechanism.

Hunger in the World Today

After years of progress on decreasing hunger in the world, we have backtracked on those advancements with more than 820 million undernourished people in 2017. Approximately 155 million children will see the effects of stunting for their entire lives due to chronic malnourishment as well as a reduction of up to 13 percent of their lifetime income. Additionally, last year in Nigeria, Somalia, Yemen and South Sudan, more than 20 million people faced famine or near crisis levels of food insecurity.

One in nine people in the world today do not have enough to eat, but that does not mean we cannot get back on track. Not only can early response to famine result in saved lives and decreased suffering, but it is also cost effective. The World Bank predicts that an earlier response rate can reduce humanitarian costs up to 30 percent.

In 2017, the World Bank President Jim Yong Kim and U.N. Secretary-General Antonio Guterres pledged to have zero tolerance toward famine, and in the declaration of this program that pledge has been renewed. In the eyes of the United Nations, the success of the 2030 Agenda for Sustainable Development means ending hunger everywhere for everyone.

To conclude, in the words of Mr. Guterres: “Crisis prevention saves lives. We need to put cutting-edge technology to full use, in the service of all humankind in order to feed everyone in our world and to leave no one behind.”

The Chanje Movement’s Projects: Five Symptoms of Poverty in Haiti Increasing Financial Inclusion in Australia Through Fintech
Scroll to top