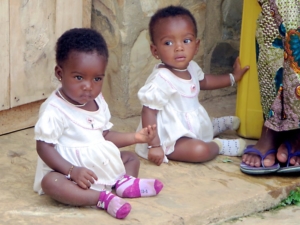 The study focused on West Africa because it is a particularly warm section of the sub-Saharan region that experiences an average maximum temperature of 32 degrees Celsius — the heat threshold after which there are effects on mortality. It looked at data from the Demographic and Health Surveys (DHS) in the West African countries of Benin, Burkina Faso, Côte d’Ivoire, Ghana and Togo between 1993 and 2014.

The DHS Program conducts household surveys to collect data from developing countries about health, nutrition and demographics. Researchers studied the nutrition of children aged 3-36 months who had been exposed to temperatures at multiple ranges, the highest of which is above 35 degrees Celsius or 95 degrees Fahrenheit.

According to the study, extreme heat affects child growth and nutrition in three main ways:

Beyond health impacts and higher mortality rates, chronic undernutrition can also lead to worse learning outcomes and lower incomes later on in life, which perpetuates the cycle of poverty and malnutrition.

Research published by the American Association for the Advancement of Science showed that extreme weather patterns are linked to increased conflicts, the spread of diseases and migration globally. While the study analyzed child nutrition and temperatures between 1993 and 2014, its findings have larger implications for the future.

Rising temperatures are affecting the African continent disproportionately. According to the National Oceanic and Atmospheric Administration, 2021 was the sixth warmest year globally, but the third warmest year for Africa. In particular, West African countries faced their highest annual temperatures on record, including the countries reviewed in the study. The region is also likely to be more prone to heat waves in the future, which can set off droughts and other extreme climate events. In addition, Africa already has a high rate of stunting at 30.7% compared to the global average of 22% as of 2020, according to the Global Nutrition Project.

The effects of extreme weather patterns on food insecurity can already be seen in the long-term drought in the Horn of Africa, where millions are food insecure and are facing malnutrition. Western Africa is also experiencing a food crisis exacerbated by multiple factors, including extreme weather events, conflict, Russia-Ukraine war-driven inflation and impacts of the COVID-19 pandemic.

This issue will not stay localized to Africa — many other regions are seeing the impacts of extreme heat. Europe experienced extreme heat waves in June and July 2022, with countries such as France breaking temperature records. Along with these heat waves come wildfires, heat-related deaths and rising food prices from decreased agricultural production, leaving many families food insecure.

The study found that in the period of analysis, interventions such as improved infrastructure and child care decreased rates of stunting by 5.8%. Programs instituted by organizations such as UNICEF, Save the Children, the World Food Programme, Actions Against Hunger and more have made a tangible impact on providing food assistance and reducing child malnutrition in the past few decades.

Countries across Africa, including Senegal, Rwanda, Cameroon and Angola, set up councils or committees in their governments to address food insecurity and malnutrition. They started initiatives encouraging breastfeeding, fortifying foods, hosting school feeding programs and using technology to spread awareness about the importance of nutrition. Malabo Montpellier Panel, an international group of agriculture and food security experts, noted that these countries saw a significant drop in stunting and undernourishment rates between 2000 and 2016.

As the current food crisis persists, President Joe Biden’s administration announced $215 million in emergency food assistance to several African nations as of May 2022. This is an important step in addressing what Secretary of State Antony Blinken called “the greatest global food security crisis of our time.”