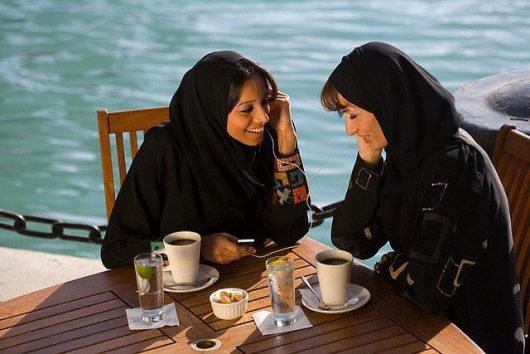 The inception of the United Nations (U.N.) Millennium Goals spearheaded the push towards achieving more social progress by promoting gender equality and the empowerment of women. Despite the fact that two-thirds of the developing world have achieved a level of parity, the problem still persists in the Middle East and North African countries. The lack of access to education, the right to marriage, ownership and custody rights are some very common and debilitating issues that contribute to gender discrimination. However, some of the following examples of gender discrimination shed light on the more uncommon and often overlooked examples of gender inequality.

1. The Gender Gap
Developing and developed countries have faced this social issue, although to varying degrees. Women in developed countries still face social hindrances owing to the gender – wage gap – a phenomenon that will still take 188 years to even up, according to the World Economic Forum. Women also have fewer responsibilities and are given fewer rewards for their work.

2. Being Forbidden to Drive
Across many conservative communities in Saudi Arabia, women still face this major social bulwark. Despite it not being a law, women are still not allowed licenses and can only exercise the right to go out in public if accompanied by a chaperon. The Arab Spring in 2011 resulted in a deluge of rallies and protests among women. Even though society is becoming more progressive, especially with regards to allowing women to contribute to the labor force, it will take further social reform to overcome this hindrance.

3. Restrictions on Clothing
Upon the pretext that women should not ‘flaunt their beauty,’ women in many conservative communities have to wear the complete body burqa, coupled with loose-fitting clothes when they are out in public as an interpretative exegesis of the Sharia Law. Many world leaders like U.K. Prime Minister Theresa May have spoken against the issue which is very pervasive in Saudi Arabia, Gambia, Sudan and North Korea.

4. Not being Allowed to Travel
In some extreme cases, women are not allowed to leave the country without the consent of their husbands. Up until the age of 40, single women are required to ask their father for permission. For example, Niloufar Ardalan, the Captain of the Iranian Women’s Soccer team was banned from taking part in the Women’s Futsal Championship of Malaysia in 2015 by her husband as it was in violation of Islamic Law.

5. Honor Killing
This is a deplorable practice that revolves around the hidebound idea that girls have to uphold the supposed ‘cachet’ of their families and abide by the patriarchal demands of the society. Honor killing is largely attributed to the poor education system and ineffective government legislation among rural communities. Consequently, Qandeel Balcoh was killed by her brother Waseem Ali in 2016 because she had supposedly brought dishonor upon her family because of how she expressed herself on social media.

6. Female Genital Mutilation
This problem is prevalent in Sub-Saharan African countries, Egypt and other countries in South Asia due to lack of sex education and awareness. The practice stems from a fundamentalist cultural ideology still held by many traditional communities and based on ensuring a girl’s fidelity before marriage. It is one of the very dire examples of gender discrimination and is a human rights violation. It results in severe pain, difficulties in urination and spread of infection.

7. Female Infanticide
Unfortunately, this practice is rather prevalent among rural communities in India, Pakistan and China. For example, China’s one-child policy has contributed to this issue. Boys are thought to galvanize the financial security of the family, while women are treated as burdens and often seen only as child-bearers and caretakers of the household. In some regions, there are as low as 300 girls for every 1,000 boys. Moreover, Beti Bachao, Beti Padhao (Save Girls, Teach Girls) in India, is a social reform initiative that is cracking down on related issues like child marriage.

8. Lack of Legal Rights
This form of gender discrimination is ubiquitous in many countries. From child custody and rape laws, this broad term encompasses many aspects where women are not given enough legal counsel. Spousal rape is not criminalized in many countries and complaints lodged with the police never materialize. In many countries in the Middle East, divorce laws are very weak. The evidence is often not admissible in court and eyewitnesses are always required for cases to be considered.

The progress made over the decade to combat gender discrimination is truly remarkable. Historically pivotal revolutions like the Suffrage movement have been the foundation for women’s rights activism today. Both modern and classical feminism are becoming widespread concepts that many in the international community are adopting. The steady momentum of human rights organizations like Amnesty International, the International Alliance for women, U.N. Women and other local non-governmental organizations have already made a big difference.

Achieving women’s rights is an effective way to crumble ramparts made by society. Female participation greatly helps bolster the economy and catalyze social development in the long run.