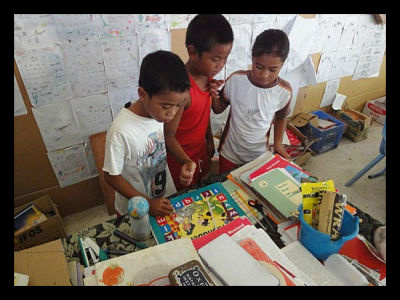 Tuvalu is one of the smallest and most remote countries on Earth. The total land area of the country is approximately 26 square kilometers, or comparatively 0.1 times the size of Washington, DC. Located in Oceania, the country is an island group consisting of nine coral atolls in the South Pacific Ocean with a population of 10,782.

Prior to the restructuring of the education system in 1998, communities operated early childhood education and  had no support from the government. Preschools were operated under a voluntary basis and teachers were poorly appointed and often untrained. Tuvalu also did not have the proper infrastructure to support schools.

Tuvalu’s education system at the primary level was also restructured and revamped. Goals and targets contained in the Tuvalu National Education Policy Document included compulsory education for all Tuvaluan children between the ages of six and 15, redesigning and strengthening the administration of the education system, access to education and training for all, development of a national curriculum, as well as improvements to school buildings, teacher training and programs for students with special needs.

Many other improvements and goals were to be met following the restructuring of the system. Children were not the only focus of the reform—education for survival with reference to community life skills was also made available. The skills that adults were offered included secretarial skills (typing, computing, office skills, etc.), carpentry, pluming, engineering and home economics.

Additionally, strategies were put in place to improve the overall quality of life and standards of living. Basic housing, clothing, water, food and nutrition, access to health and education as well as the ability to participate in community life and cultural pursuits strengthened the communities of Tuvalu.

According to the IMF, although cases of extreme poverty are rare, poverty in Tuvalu has risen in the last few years despite improvements in education. Given Tuvalu’s limited land area, poor soil and geographic isolation, it is difficult to create large private-sector employment opportunities domestically. Therefore, citizens of Tuvalu will need to better utilize overseas job opportunities, including seafarer employment and the temporary labor migration scheme in New Zealand.

Vocational training will need to be strengthened in order to enhance the competitiveness of Tuvaluans for these important sources of foreign exchange earnings and to reduce poverty.