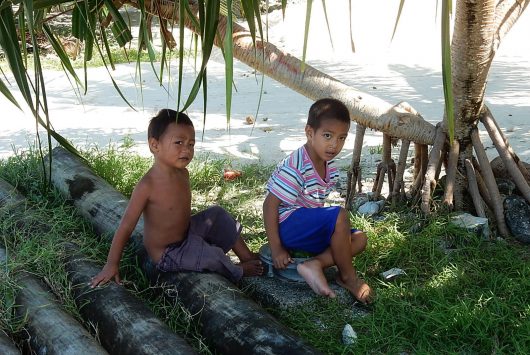 Tuvalu (pronounced two-vah-loo) is a tiny island nation in the South Pacific. It is home to just around 11,500 people. They are the only ones in the world to speak their native language, and their way of life is very remote. The small island nation relies primarily on subsistence living. This completely redefines what poverty means in this setting. Tuvalu is the fourth most impoverished nation in the world, but it is important to look at this South Pacific island nation from a different perspective. If one measures poverty in terms of income level, then they will measure Tuvalu in a much bleaker light than what is appropriate.

Facts About Poverty in Tuvalu

Although the country comrpises nine islands and numerous small islets, it has seen tremendous population growth. According to the Food and Agriculture Association, Tuvalu had 10,600 people as of 2017. In one year, this number increased by almost 1,000 people. More people means more mouths to feed. Despite food scarcity, “everybody helps everybody,” according to John Goheen, director of the upcoming documentary, “We Are Tuvalu.” Goheen spoke to The Borgen Project in an interview. “Nobody goes hungry. It’s a country that’s very small, very close-knit.”

Tuvaluans spend just under $2 on food per day. Ironically, many in Tuvalu are overweight. The population eats about one-fourth of the recommended intake of fruits and vegetables per day. When it comes to food scarcity, it all comes down to what is easily accessible. Tuvalu imports rice and sugary foods and they are cheap to buy while vegetables are hard to grow and fish are getting scarce.

Only recently has Tuvalu had to rely on imports. Before, they lived a subsistence lifestyle. Most families own pigs, and many own chickens or roosters, but fish remains their main source of protein. However, fish surrounding the islands are becoming scarce. Imported rice makes up 34% of the food consumed, coconuts make up 19%, white sugar makes up 17% and fish make up 7%. Unfortunately, Tuvalu imports rice and sugar.

A Decline in Tuvalu’s Fishing Industry

It is getting harder and harder for Tuvalu’s fishermen to come home with a good catch, said Jake Pieczynski, executive producer of “We Are Tuvalu,” when speaking with The Borgen Project. “And that’s primarily caused by climate change, specifically, the warming of the ocean. As the temperatures rise, the reefs that surround Tuvalu die. Fish lose their homes; they migrate to other areas.”

Another factor in coral reefs dying is waste from pigs. Pig sites are close to the shoreline, so feces washes into the ocean and kills off some of the coral by the coast. Of course, without coral, fish cannot breed. One solution the government has been putting in place is planting thick, dense grass imported from Fiji to shield much of the pig waste from washing into the water.

Tuvalu is a young nation. In 2017, youth between the ages of 15 to 35 made up 35% of the population and 39% of them did not have employment. Culturally, children must take care of their parents once they hit the proper age, which makes that statistic a bit more alarming. The retirement age in Tuvalu is 55.

Pieczynski talked to the Minister for Labour during his time in Funafuti. He reported that the minister estimated that probably more than half of the population did not have employment. However, Pieczynski also noted that he never observed anyone living on the streets; no one goes homeless. “You don’t really need to have everyone in your household working a full-time job in order to survive and live a good lifestyle in Tuvalu,” Pieczynski said.

Improvements to Poverty in Tuvalu

There is so much that some are doing to improve the livelihoods of the people in Tuvalu. Now that Tuvalu is joining the global economy and relies on imported goods, money is much more of a commodity than it once was. Tuvalu uses the Australian dollar. Many people take advantage of overseas jobs in order to send money back to their families in Tuvalu.

To address food scarcity, many non-government organizations (NGOs) travel to Tuvalu to re-educate Tuvaluans and help them adapt to changing climate conditions. For example, the agricultural center of the capital uses raised garden beds, so that saltwater will not disrupt the crops. Climate-resilient crops are a must as well, according to Goheen. A breadfruit tree can weather a storm much better than pulaka. One such organization is Live and Learn Environmental Education. Its “Tuvalu Food Futures” program aims to increase local food consumption and decrease reliance on imported goods.

While poverty in Tuvalu may not seem as big of a threat as local food scarcity, it is still relevant. Many live without making much money and rely instead on their families. Luckily, there seems to be a strong sense of community on the islands. Hopefully, with the help of NGOs, food scarcity can reduce through more sustainable agriculture.