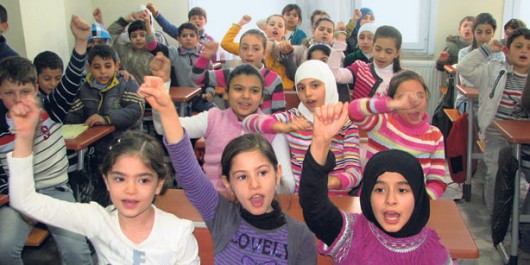 The Syrian Refugee conflict has been a hot topic globally for months now. Many countries have been accepting Syrian refugees since the climax of the crisis, but once a temporary home has been found, what next?

On average, a refugee will stay in a camp for 17 years. In these crowded and busy communities, individuals and families try to create a semi-normal life.

For smaller children though, living in these refugee camps means growing up without a fair chance to attend school. Therefore, greater focus needs to be placed on education for Syrian refugees.

According to The UN Refugee Agency, UNHCR, the Syrian refugee crisis could be a large contributor to another global crisis. Poverty rates, already at a high, could be negatively impacted if proper action is not taken.

In a study done by the UNHCR entitled “Living in the Shadows,” the organization stated, “Two in every three Syrian refugee households are below the absolute poverty line in Jordan, and one out of six is below the Jordanian abject poverty line…households’ economic vulnerability appears to increase over time.”

While humanitarian aid is a huge part of alleviating this problem, more needs to be done. Refugee education and training in vocational skills are a necessity to combat the struggle of poverty within and outside of these refugee camps.

According to The Guardian, “Globally, over 50% of refugees are children. Yet only one in every two refugee children attend primary school. Only one in four refugee adolescents receive secondary school education.”

It has been proven several times over that educational opportunities are one of the key solutions to eradicating poverty. With education comes new skills, a more secure future, and a more stable country.

Recently, more countries have started to pick up on this trend and are working to make necessary changes.

Lebanon, the country with the highest amount of hosted Syrian refugees, is providing education opportunities for 200,000 of those children.

According to the University World News, “The University of Copenhagen has asked the Danish government for permission to create extra student spaces for refugees and migrants arriving in the country.”

For refugees, education is everything. It is the key to getting out of poverty and a source of hope amidst hardship. Continuance of improved and increased educational opportunities is one of the top essentials of getting Syrian refugees out of poverty and helping them contribute to society wherever they currently reside.

Deaf Children in Poverty: A Right to an Education Micro Hydropower & Other Energy Sources to End Poverty
Scroll to top