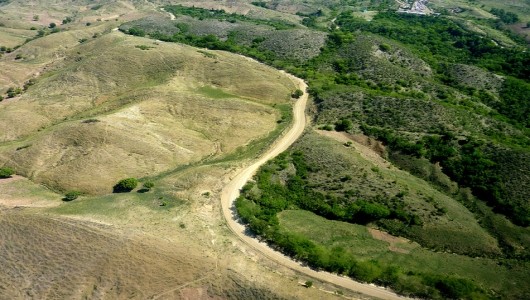 Haiti and the Dominican Republic share the island of Hispaniola. Despite the proximity, the two countries are worlds apart.

Haiti is the poorest country in the Western hemisphere. Eighty percent of the population lives in some degree of poverty. According to the U.N. Human Development Index, Haiti ranks 149th out of 182 countries.

About a third of the Dominican Republic’s citizens live in poverty. Not an ideal rate by any means, but markedly better than Haiti’s. If you live in the Dominican Republic, you can expect to live 74 years and there is a 90% chance you are literate. In Haiti, those numbers drop to 61 years and 50%, respectively. Child mortality rates are three times higher in Haiti.

Dominican Republic citizens also enjoy infrastructure such as roads and reliable electricity. In Haiti, that is a dream.

How did two countries that share an island become so different? The answer is rooted in their histories and geography, and how both of those shaped their use of the rainforest that once covered most of Hispaniola.

Haiti has a larger coastline than its neighbor, making it more susceptible to hurricanes. Since its biggest cities are on the coast, they are adversely impacted by flooding.

During colonial times, Haiti was a colony of France. The economic driver was forestry and sugar-related agriculture, which caused considerable environmental degradation. The French owners also imported a lot of slaves for labor. Due to the mixing of so many cultures, there has been much political instability since Haiti’s independence in 1804.

The Dominican Republic was ruled by Spain until 1844. Although Spain did exploit the island’s resources for monetary gain, it imported far fewer slaves, leading to a more homogenous culture when they ceded control. Its primary economic driver was livestock farming.

Although the Dominican Republic has endured its fair share of political strife, the country has been politically and economically stable since the institution of a democratic system. The stability has played a role in the preservation of their rainforest. This has had many economic benefits, as tourism is the biggest cog in the country’s economy. There are also many residual effects. The rainforest inhibits mudslides from occurring during rainstorms, preventing millions of dollars of damage to infrastructure. The rainforest also keeps the soil intact for substance farming, which provides a source of livelihood for many people.

In Haiti, 98% of the rainforest has been removed. This process started under French rule and continues to this day. Haiti’s lack of reliable electricity makes wood burning the island’s primary source of power. It is estimated that 15 thousand acres of topsoil are washed away annually. This lowers the monetary and crop productivity of the land, which causes more poverty, which leads to more deforestation.

To break this vicious poverty cycle, the Haitian government has pledged to prevent the complete deforestation of Haiti. President Michel Martelly launched a campaign in 2013 to plant 50 million trees a year. Reforestation is considered essential to raise living standards. The goal is to have forest cover 29% of the country by 2060.

The campaign has slowed deforestation through educational outreach to farmers, and by promoting non-wood burning stoves. Apparel company Timberland and its partner, Smallholder Farmers Alliance, have assisted with the process by planting over five million trees.

The link between poverty and excessive resource exploitation is clear in Haiti. Long-term planning about ecosystem viability is essential, not just for the environment, but also for the people who live there. That’s something every country should notice.