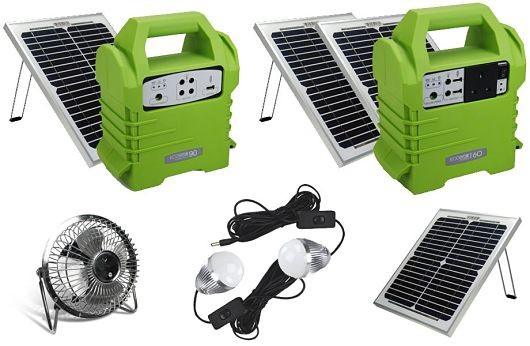 When a bike accident left Pascal Kassongo injured, out of a courier job, and nearly destitute, his prospects looked grim. But thanks to the Amandala Project, Kassongo has found a new source of income with the Ecoboxx.

Lightweight and portable, each Ecoboxx can supply up to 50 hours of power and comes with a fan, hair clippers and charging ports for cell phones and other devices. Since launching in January of 2015, the Amandala Project, whose name means “power” in Zulu, has distributed 300 solar power kits to South Africans in need, with plans to distribute almost 600 more kits in the near future.

The goal of the project is to supply the unemployed, and particularly the migrant, residents of South Africa with the means to start their own small businesses, free of any charge past the initial investment. An individual can make up to 1,600 rand (about $128) cutting hair each week, and another thousand charging phones and other devices. The average income in South Africa for unskilled workers is around $500 per month.

While some choose to stick with running a barbershop with their Ecoboxx, others have come up with creative alternative uses. Janet Bete, who came to South Africa from Zimbabwe, rents out her kit for lights to local businesses and churches operating when it is dark. The enterprising woman also takes time to give back to her community. “Whenever there is a funeral in my community and there is no power, I donate my lights—it’s my way of paying [people] back for living well together,” said Bete.

Kassongo has also opted to put his solar kit to an alternative use. Rather than run a barbershop himself, Kassongo, a father of four, rents his kit out to neighbors who do own barbershops, sharing the proceeds with them. “It helps put something on the table,” said Kassongo.

The Ecoboxx, which retails at around 4000 rand, is being distributed by the Amandla Project, a subsidiary of the South African organization Community Chest, for a nominal fee of 200 rand. Community Chest CEO Lorenzo Davids said he hopes the kits will “electrify” rural South Africa, and when combined with creative entrepreneurialism, help generate income in the regions that so desperately need it.