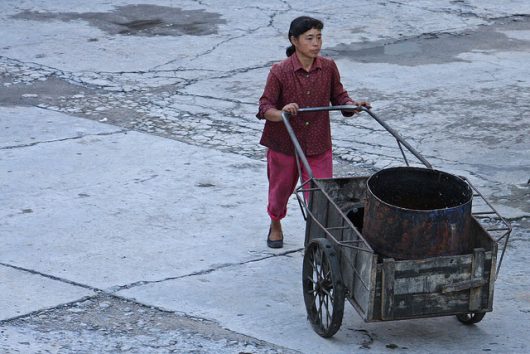 Despite the prevalence of media censorship and manipulation, North Korea carries a reputation for widespread poverty and a less than competitive economy compared to the rest of the world. The growth domestic product (GDP), or market value of all final goods and service from a nation in a given year, is ranked at 197 in the world, and the country’s focus on military showmanship is contrasted with its desperate need for food aid and other forms of economic assistance.

Given such circumstances, the cost of living in North Korea is far below other regions of the world. According to the Korea Institute for National Unification, “the standard of living has deteriorated to extreme levels of deprivation in which the right to food security, health and other minimum needs for human survival are denied…” With more than half of North Korea’s population living in extreme poverty, resources to sustain a basic quality of life are nearly impossible to access.

Indeed, the cost of living in North Korea is unrepresentative of the economic hardship faced by most citizens. Workers typically earn between two and three dollars a month from the government, and mismanagement in currency caused inflation to rise to figures as high as 100%. The Public Distribution System (PDS) continues to be the main source of food for more than 18 million people, approximately 70% of the population as of 2016, and unreliable electric power and water supply is also common.

Prevalent starvation in the countryside is contrasted with seemingly higher quality life in Pyongyang, the country’s capital. There is a plethora of new high-rise apartments, cheap plastic surgery costing as little as two dollars, and foreign fashion trends. Beneath this lies forced labor as a cheap means to polish the external appearance of the city.

This past year, living conditions worsened as a dry spell from April to late June severely damaged the production of rice, maize, potatoes and soybeans, potentially leading to added food shortages. It was determined to be the worst drought the country has faced since 2001. The call for international intervention draws many complications, particularly in regard to the country’s recent activity in nuclear weapons development.

Although North Korea earns foreign currency from the trade of millions of tons of coal with China every year, accounting for a third of all its official exports in 2015, military expenditures remain high, worsening the cost of living in North Korea and suppressing overall quality of life. Ongoing nuclear weapons testing made several countries question whether or not to continue its foreign aid programs in the region. Despite the fact, the United Kingdom and the United States continue sending aid. North Korea received more than £4 million in foreign aid from the U.K. over the past six years, and more than $8 million to assist vulnerable women and children.

Nonetheless, the proliferation of private enterprise, though still officially illegal, made it possible for individuals to generate profit in 2017. Beyond production requirements given directly to the state, farmers and factories are able to seek customers of their own. Six taxi companies now operate in Pyongyang, and Minis, a home-goods store, became the first foreign chain to open in North Korea this past April.

This recent economic growth has broader implications for the North Korean government, potentially undermining arguments supporting socialist superiority over capitalist systems. Information combating widespread propaganda already started slipping in with foreign goods and products. The potential for a better cost of living in North Korea and higher quality of life is increasing, suggesting that the future may just hold fewer poverty constraints and broader human rights opportunities for the country’s citizens.

5 Things to Know About Pakistan’s IDP ProblemLeading by Example: Refugees in Monaco
Scroll to top