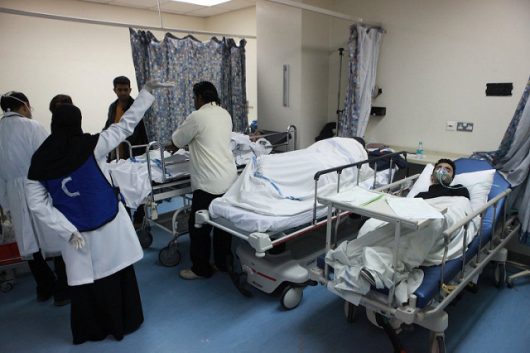 People living with HIV/AIDS comprise only .01 percent of Bahrain’s total population. While Bahrain has a very low HIV/AIDS rate compared to other countries in the region, there are still other common diseases in Bahrain.

Cancer in Bahrain also contributes to a small percentage of deaths. Bronchial and lung cancers are the most common among the population of Bahrain. Tobacco use is very common among adults and children daily: one-third of men in Bahrain use tobacco.

The government is in the process of coming up with preventative measures to decrease the cardiovascular disease rate and those of other common diseases in Bahrain. The National Health Strategy 2015-2018 will provide health insurance, and an executive committee has been established for a national health insurance program. The committee is currently looking for ways to improve efficiency in using scarce health resources.

Only a small amount of the nation’s budget is allocated for public health each year. In 2014, only 4.98 percent of the budget was spent on healthcare. The density of physicians and nurses has been fairly low over the past few years.

However, there has been some progress made in recent years. For example, the national medicine policy has been updated by the Directorate of Materials Management, and some government sectors have collaborated through the national purchasing committee.

Bahrain has a good economy and relatively low rates of disease compared to other countries in its area. With the proper treatment and education, Bahrain’s cardiovascular disease rate can decrease a small amount at a time. With the help of the government and its people, the country can work to continue to educate everyone on preventative measures.