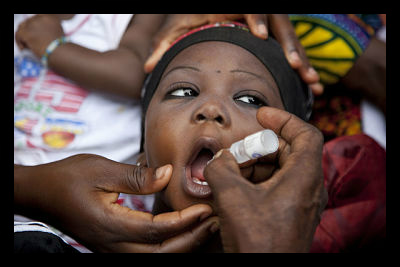 New research has shown that the use of two vaccines in conjunction may dramatically increase polio immunity. Children who receive a vaccine shot after taking an oral vaccine show greater resistance to the disease than those who receive no follow-up shot, and even those who take a double dose of oral medication.

The World Health Organization announced that combining vaccines is starting to be used for mass vaccination campaigns in heavily affected regions, as well as for routine immunizations is developing countries. The double-vaccine method is currently being used in Nigeria and will soon be launched in Pakistan.

The fight against polio has been relatively successful. Within the last 26 years, the number of countries regularly affected by polio has dropped from 125 to three.  The number of cases has fallen by 99 percent. But with increased international travel, the threat of polio is resurfacing in countries previously deemed free of the virus. In May, the WHO declared an international public emergency, reporting polio outbreaks in at least 10 countries.

Until now, researchers were unable to determine a vaccination programs that provided optimal results. But trials in India have established that two vaccines used together yielded the lowest amount of virus in subjects’ feces, one of the major ways the virus is spread.

Oral Poliovirus (OPV), the oral polio vaccine, consists of a two-drop dose of weakened polio virus. It induces immunity within the digestive tract, so it has long been used to disrupt person-to-person transmission of the disease. However, this type of immunity diminishes with time, and in certain cases OPV can actually trigger a vaccine-caused case of polio. This is why inactivated poliovirus (IPV), the vaccine shot, has been added to the procedure. IPV provides immunity stronger and more extensive immunity by traveling through the bloodstream, and also protects against potential infections caused by OPV.

“The results that clearly demonstrate that IPV substantially boosts both [intestinal] and [bloodstream] immunity in children previously vaccinated with OPV are historic and have major operational implications for the global polio eradication effort,” said Dr. Hamid Jafari, WHO’s director of polio operations. He added, “It could play a major role in completing the job of polio eradication once and for all.”

Developing countries still favor oral vaccination because it is less expensive and easier to administer. But OPV’s temporary effectiveness makes it necessary for children to receive repeated doses. The injected vaccine is more expensive, but it is deemed by experts to be worth the investment because only one dose is necessary and it eliminates polio in infected areas more rapidly.

Using the combination strategy is also effective when fighting endemic polio in remote and war-torn areas where oral vaccines may not always be safely or routinely delivered. “We want to take maximum advantage of each contact with a child, said CDC vaccine expert Dr. Steve Cochi. “It’s the start of the last stand for wild polio virus, and we’re trying to hit it with both vaccines.”