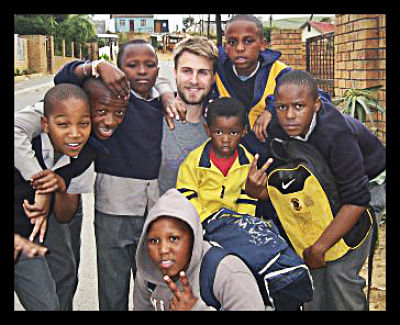 Chris O’Sullivan may not be a celebrity, but he definitely is not your average wait-for-the-employer-to-call college graduate. O’Sullivan’s Travels is much closer to Gulliver than Sullivan. Unlike Gulliver, however, he not only reaches out to the world but lets the world reach back—the world of South African students struggling with disadvantages and the world of donors given the opportunity to really make an impact and watch their money make a huge difference.

After graduating with a degree in Education from Shippensburg University, O’Sullivan traveled to the Stellenbosch region of South Africa to aid a school of 1,800 students divided amongst only 40 teachers with few supplies at their disposal. Despite the creativity, passion, perseverance, and best intentions, one teacher can only do so much with 50 students and limited resources.

Two years later, 2 months from now, O’Sullivan is returning to Kayamandi to again lend his skills and experience. O’Sullivan is not returning empty-handed. He is bringing his network of support. His goals for this trip are twofold: First, he wants to give South Africa to the South Africans. Having a slim-to-none chance of ever going on vacation to a domestic or foreign destination, O’Sullivan wants to bring the beauty and wonder of South Africa to the students of Kayamandi. “Imagine living on the doorstep of Disney World and never being able to step inside.” So many of the students have never ridden in a van, slept in their own bed, eaten in a restaurant, or even seen the ocean (South Africa has 2,798 km of coastline!). His second goal is to stock the school with supplies. Pencils, paper, posters, books and magazines will go a long way towards improving the education the students receive.

The count down has begun. Two months to go. O’Sullivan has spent the last year working numerous part time jobs to pay for his trip and received support from friends, family, and a larger network.

Chris O’Sullivan is not a celebrity. Not by television standards anyway. But, ask any student in Kayamandi, South Africa, and you can bet they’ll know who he is.