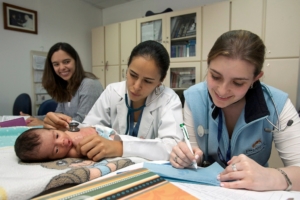 Venezuela’s economic, political and social status has become increasingly restless over the years. While instability can be traced back to government policies of the early 2000s, such as price and foreign currency controls, the economic crisis had dramatically escalated since Nicolas Maduro became president in 2013. An annual inflation rate as high as 1.3 million percent and a shortage of food and medical supplies has brought the country to the brink of famine. Indeed, 90 percent of Venezuelans live in poverty, up from 48 percent in 2014.

In Search of Safety

As a result, four million Venezuelans have fled the country since 2014 in search of stability. While some migrants have gone to the United States and Spain, the vast majority have decided to leave for other Latin American countries such as Peru, Ecuador, Argentina and Brazil. Colombia has seen the greatest influx of Venezuelans. In August 2019, 1 million migrants were reported. Now that President Maduro has been reelected,  analysts expect that this figure will only keep rising.

Since 2015, 24,000 children of Venezuelan migrants have been born on Colombian territory. However, amid the country’s many crises, Venezuelan consular services are unable to register the foreign-born children for citizenship. Many of these refugee children are born stateless, which is a major human rights issue. Without proper documentation confirming a child’s nationality, they lack access to government programs to protect their well-being, such as healthcare, immunization and education, essential to socio-economic mobility. Moreover, undocumented populations are unable to vote and are not politically represented in the countries where they reside. This issue is becoming increasingly urgent; some medical centers like the Erasmo Meoz Hospital in Cucuta, Columbia receive more Venezuelan parents than Colombian parents.

In response to the growing concern of a new and vulnerable generation lacking vital social services, Colombian President Iván Duque Márquez moved to protect their rights. He announced in a press conference that all children of Venezuelan migrants born in Colombia after August 2015 will be granted citizenship. In his speech, Duque made it clear that this was a crucial measure to protecting the “defenseless” and that doing so upholds the country’s constitution.

Speaking about refugee children, the president asserted that, “today, proudly, we tell them they’re Colombians.” This is excellent news for the parents of these children, who fled Venezuela largely to provide their families with better opportunities. Regarding the decision’s impact on her daughter’s life, migrant parent Mariela Martiarena was very enthusiastic. “This is the best for her. She needs everything, like health care. She needs it for her future.”

If not for the new proposal, babies like Isabella would be born completely stateless. Before the 2015 law, she would only have acquired Colombian nationality if at least one of her parents was Colombian, or if one of her parents were legally domiciled by the time of her birth. This makes up a minuscule amount of the refugee population.

Applause From the International Community

While the decision is temporary and only in place until August 2021, it’s an important start in addressing human rights and mitigating poverty in the Venezuelan diaspora. The United Nations has lauded Colombia’s measure as a step toward ensuring fundamental rights and safer migration. Specifically, The UN Refugee Agency, part of the UN Human Rights Council (UNHCR), has announced that they will financially assist Colombia in implementing the acts.

Providing children with citizenship can prevent them from experiencing a lifetime of discrimination, which often follows statelessness. Moreover, because the children of Venezuelan migrants are now citizens, these parents can more easily immigrate legally into Colombia and earn nationality.

Some see this new legislation as a way to return the favor for Venezuelans who aided Colombian refugees during Colombia’s struggles of the 1980s and 1990s. Felipe Muñoz, who helps manage the Venezuelan border, approves of President Duque’s proposal for this reason. “Let’s remember that decades ago it was they who received us Colombians in their country when the situation was inverse and it was us fleeing difficult local conditions.” Colombia’s decision to provide the children of Venezuelan migrants with Colombian nationality is an important symbol of empathy and cooperation in the global strive for human rights.