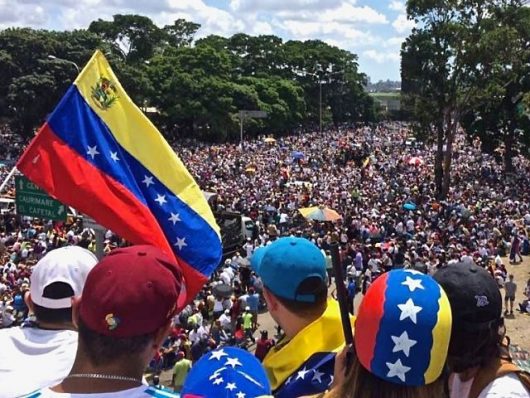 Venezuela, once expected to be one of the richest countries in South America, has been crippled by socialist dictators and now suffers from widespread poverty. In fact, 82% of the population lives in poverty. With the largest oil reserves in the world, Venezuela’s economy has become solely dependent on oil.

Venezuela has relied on high oil prices to bolster their exports and pay for importing basic goods, including food and medicine. However, with the price of oil dropping dramatically in the last few years, Venezuela’s economy has taken a major hit and caused drastic inflation. As inflation skyrocketed and political turmoil brewed, investors and businesses drained out of the country.

Currently, Venezuela leads the world with the highest inflation. In December of 2016, it reached a high of 800% inflation and has not significantly decreased since. According to the LA Times, it cost $150 to buy a dozen eggs in Venezuela in 2016. This hyperinflation has caused Venezuela’s currency, the Bolivar Fuerte, to depreciate. This has caused the poverty rate of Venezuela to jump to more than 80%.

The face of poverty in Venezuela is also changing. With such a staggeringly high poverty rate, poverty now affects citizens with degrees who cannot find jobs and more urban people, in addition to the already rural poor.

Long lines at supermarkets have developed as people seek the most basic and necessary means of survival. According to CNBC, Venezuelans are eating two or fewer meals a day and around three-fourths of the population have watched their weight decrease throughout the years.

In 2016, President Nicolas Maduro increased the minimum wage by 40%. With inflation, this means that citizens who receive minimum wage earn just $67 a month. The explosive poverty rate and lack of proper government response have prompted protests, as this issue is now being seen as a clear violation of human rights.

However, opposition leaders Leopoldo Lopez, his wife, Lilian Tintori and Capriles Radonski acknowledge the situation and have been fighting for a better Venezuela. A Venezuela with democratic power, basic goods and luxuries everyone can afford, a Venezuela with jobs for everyone, lower crime rates and better health care.

The high poverty rate in Venezuela has reached the attention of the world. Raising awareness has been part of finding hope for Venezuela. The hashtag #SOSVenezuela has been used over the last few years to protest corruption and has acted as a rallying cry to bring global attention to the people affected by Venezuela’s dire political situation.

Why Is Sri Lanka Poor?10 Facts About Refugees in Namibia
Scroll to top