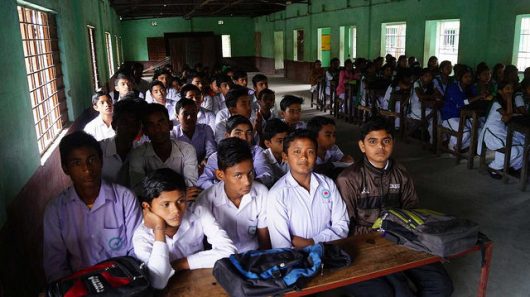 Debates about education often center on the quality of public schools, diminishing budgets, scarce resources and technological provisions in the United States. While a focus on domestic educational issues is commendable and necessary, there is a grimmer picture across the world. According to the World Inequality Database on Education, fewer than 50 percent of the poorest children have completed primary school in 39 out of 88 countries. The economic productivity and social quality of life of any country depends on its educated population, and closing the gap in global education is the key to global prosperity, safety and stability.

Indeed, education can eliminate bigger problems such as poverty, inequality, insecurity and disease. Equal access to a quality education, including access to content and means of delivering instruction and following a set curriculum, remains an unrealized dream and a struggle for many.

The last two centuries have seen an exponential increase in the number of children attending primary school globally, from 2.3 million to 700 million today. What is troubling is that children in the poorest households of developing nations, those arguably most in need of educational opportunities, are four times as likely to be out of school as those in the wealthiest households.

It is going to take another 100 years for children in developing countries to reach the education level of their counterparts in developed countries.

Access to a quality education remains a basic building block to success. Current approaches to educational equity necessitate a fundamental rethinking in that they must take into account that many children are unable to go to school because schools simply do not exist in parts of developing countries.

If schools do exist, teachers may lack proper training and simply be incapable of handling the demands of a classroom setting. Furthermore, barriers inherent in certain areas, such as societal demands and expectations, can hamper learning outside the classroom.

Though technology makes learning opportunities more widely accessible by decreasing the significance of geographical boundaries, a lack of technological infrastructure means that many children are deprived of the digital educational resources taken for granted in developed nations. For these students, the difficulty of closing the gap in global education comes with an additional cost: loss of productivity.

In 2015, the United Nations heavily promoted the Millennium Development Goals to achieve free universal primary education for all children by the year’s end.

Although it was unfortunate that the pace of improvement by countries could not keep up with the desire to have universal primary education, the primary school net enrollment rate did reach over 90 percent, and the number of out-of-school children fell from 100 million in 2000 to 57 million in 2015 . Movement toward closing the gap in global education is signified by the fact that not a single country in the world today is completely without a schooling system.

Today’s economy is knowledge-based and highly competitive. Schools in developed nations are entrusted with students who lack neither skills nor talents, but educational opportunities.

Some factors are beyond students’ control, such as where they were born and what their financial means are. But with the recent advancements in educational models, global education disparity can meaningfully be addressed and mitigated.