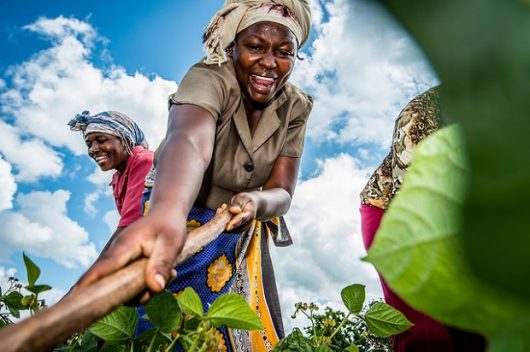 Since its conception, blockchain technology has become widely synonymous with the cryptocurrency Bitcoin. However, the utility of blockchain comes not necessarily from its manifestation in online currency but the nature of its security and accessibility. These two features are what make blockchain technology and poverty so interlinked. It holds promise as a secure and equalizing tool for the world’s poorest and most rural.

The inner mechanisms and mathematical coding of blockchain are highly complex. The principle is simple. It is a public ledger, stored and spread across multiple networks in countries around the world, making an impermeable information network. The decentralized nature of the data stored on blockchain allows for its application across all sectors without risk of disruption.

Significant to alleviating poverty, blockchain technology’s secure nature allows for it to be used as a financial services platform. In both urban and rural areas of developing countries, banks can be hard to come by, expensive to set up an account in and somewhat unreliable.

Cryptocurrency services can be scaled up and down to be incorporated into everything from the most basic phones to the world’s most sophisticated smartphones. This cryptographic technology would allow its users to send money directly to other individuals without a middleman or “trusted third parties” which take a percentage as a fee for its services and can be largely inaccessible.

Estimates suggest that by 2020 over 70 percent of the world will have access to smartphones. With financial technologies such as blockchain services, there is a real chance for those in rural or economically unstable countries to secure themselves without huge risk. Blockchain technology and poverty could have a progressive and important relationship.

By using cryptocurrencies or internet-money, individuals in financially insecure nations can take steps to avoid financial vulnerabilities, such as fraud or hyperinflation. M-PESA, a mobile money-transfer and micro-loan financing company, operates all across Africa and in parts of central Asia. Numbers from early 2017 suggest that M-PESA’s user base allowed approximately 186,000 families, two percent of Kenyan households, move from poverty into sustainable working conditions.

Blockchain’s financial services allow for mass participation in the most remote parts of the world. A wide range of business owners can build financial credibility. Currently, Chinese pharmaceutical companies receive assistance from Yijan, a blockchain created by IBM and Hejia, a Chinese supply management company.

Significant and notable players on the international landscape are quickly getting involved in blockchain techniques. The Bill and Melinda Gates Foundation’s Level One Project aims to use digital financial services to bring the impoverished into the formal economic ecosystem, providing them with the tools necessary for financial mobility.

In early 2017, the United Nation’s World Food Programme (WFP) incorporated blockchain technology and cash-based transfers into its humanitarian aid outreach in Pakistan. By using mobile-transfers, the WFP ensured that those in need were receiving financial aid without the risk of the disruption possible with cash-based aid. The technology-based transfers also allowed for the WFP to streamline its tracking system. Since the success in Pakistan, the WFP has chosen to expand blockchain to other humanitarian efforts.

These are a few of blockchain’s many applications. Its reach and potential as a tool for poverty alleviation are great, especially if utilized jointly by governments and NGOs. Although it may be no panacea, the incorporation of blockchain technology may be a significant macro approach in solving the systematic issue of poverty. Blockchain technology and poverty disruption may be one of the most exciting aspects of the new digital age.