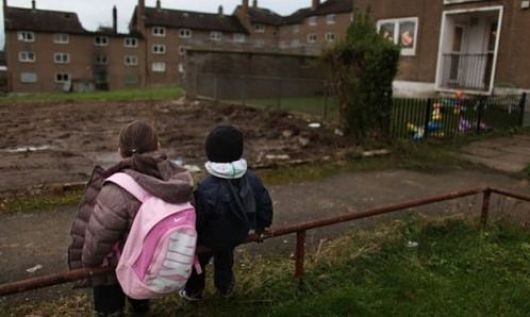 Child poverty in Wales is currently one of the largest issues facing the United Kingdom.

Under the U.K. government’s Child Poverty Act, which was recently scrapped due to poverty levels across the U.K. remaining high, a child is defined as living in poverty when they are “living in a household with an income below 60 percent of the UK average of £453 a week.”

In response to these recent figures, Work and Pensions Secretary Iain Duncan Smith stated that poverty issues in Wales are “deep rooted,” while a severe lack of public transportation has left communities without access to better jobs.

Wales’ Children’s Commissioner, Professor Sandy Holland, has been an open advocate for reform of the Welsh government’s child poverty programs. Speaking to ITV.com, she lamented that child poverty statistics in Wales are “unacceptably high.”

“The different life chances for children, whether you’re living in the poorest fifth of society or the richest fifth, they’re really stark and we’ve done nothing in the last eight years to reduce that inequality,” Holland said.

Despite a rise in employment across the U.K. since 2010, poverty in Wales has remained unaffected. Speaking to the BBC, Dr. Sarah Lloyd-Jones, director of Cardiff’s education charity People and Work Unity, says that policy reform is the first big step Wales needs to take to start improving its statistics.

Is Hosting the Olympics a Good Investment for the Host Population’s W... Family Planning and Poverty
Scroll to top