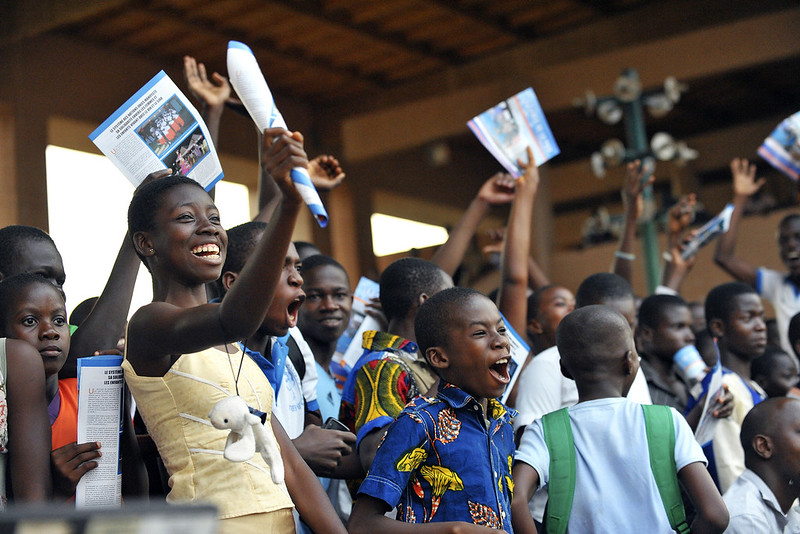 Education in Cote d’Ivoire continues to be a major challenge in the country which has had a literacy rate of 53.02 percent among 15 to 24-year-olds as of 2014. In fact, more than 2 million children are out of school due to a lack of infrastructure. Classrooms are often full beyond capacity with more than 100 students. Fortunately, West Africa is building schools using recycled plastics as a ground-breaking initiative to change the status quo.

Abidjan, a city in Cote d’Ivoire, produces about 288 tons of plastic waste every day. The country recycles only 5 percent of the waste, and when it is, it is usually women that do so informally. These women recover the waste and use it to make money.

UNICEF in Cote d’Ivoire has partnered with Conceptos Plasticos, a for-profit plastic recycling Colombian company that will turn plastic to bricks and build schools for children. This project will help reduce the issue of overcrowded classrooms and give children the opportunity to attend school.

In 2018, the first African recycled plastic classroom emerged in Gonzagueville. It only took five days to build this classroom as opposed to the nine months it would take to build traditional classrooms. In addition, within the first year, two small farming villages, Sakassou and Divo, constructed nine demonstration classrooms. These new classrooms included bricks that are cheaper and lighter than traditional ones, and also last longer.

Further Success of the Project

On July 29, 2019, a plastic converting factory opened in Cote d’Ivoire, which is also the first of its kind. This factory produces easy to assemble, durable and low-cost bricks others can use to build classrooms. The factory will solve a lot of major education challenges that children in West Africa face. According to UNICEF, kindergarteners from poor areas will be able to join classrooms with less than 100 students for the first time. Once the factory is fully functioning, it will recycle 9,600 tons of plastic waste a year and provide a source of income for women that collect trash. Moreover, there are plans to expand this project to other countries where there is a high percentage of children that are out of school.

Now, children are able to sit comfortably in classes that were once too overcrowded. This project of building schools using recycled plastics has not only constructed classrooms, but it has also reduced plastic waste in the environment. Although there is still a large number of children out of schools, this innovative project to help build schools in West Africa has been tremendously successful and has impacted the lives of many women and children.