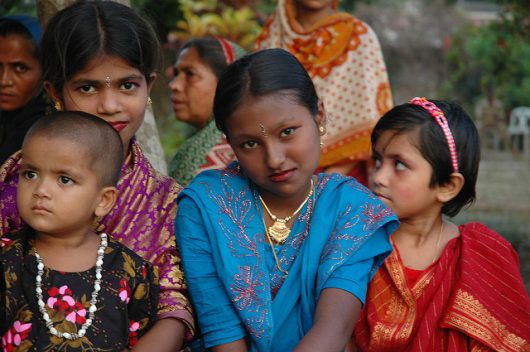 In addition to their hardships as victims of trafficking, Bangladeshi girls sold to India used to endure living in shelters for prolonged periods of time while waiting for travel permits back to their home country. The Bangladesh High Commission has recently been able to accelerate the repatriation process.

Human trafficking has been a major concern in Bangladesh for many years. Prof. Zakir Hossein from the University of Chittagong summarizes the key issues contributing to trafficking as “poverty, social exclusion, gender-based discrimination, widespread illiteracy, lack of awareness and poor governance.”

According to a 2010 report by the Protection Project, between 10,000 and 20,000 girls and women become victims of trafficking to India, Pakistan, Bahrain, Kuwait and the United Arab Emirates annually, in addition to internal trafficking. The report notes that traffickers also target boys and men.

The Indian state of West Bengal is the hub of human trafficking in India. It shares a long, mostly unfenced border with Bangladesh, which facilitates cross-border trafficking. Many girls tell similar stories: traffickers take advantage of their desperate economic situation and lure them with jobs in India. Once they cross the border, they are sold into modern-day slavery—mostly brothels, but also domestic, farming or textile work.

But, even if rescued, the girl’s hardships do not end there; the girls wait in shelters for their travel permits back home, which is a long and complicated bureaucratic process.

Even after founding an inter-country task force to organize repatriations, many girls stayed in shelters for two to three years. Shiny Padiyara, the superintendent of a shelter operated by Rescue Foundation, describes how waiting affected the girls: “They would get aggressive and in 2015, some girls broke a lot of things and a few ran away,” she said.

As the Thomas Reuters Foundation reports, the Bangladesh High Commission has become increasingly aware of the issue. The commission recently worked on accelerating the repatriation of Bangladeshi girls and women. Mosharaf Hossein, head of the consular section of the commission, cites that he “found girls and also boys from Bangladesh who were suffering a lot, waiting for long [times] to return home, because of our slow investigation,” including girls who had stayed in a government shelter for seven years.

The commission has been able to cut waiting periods significantly to about two to four weeks. In the past six months, over 200 victims of trafficking returned to Bangladesh—the highest number of repatriations in this time span. These girls finally reunited with their families, getting the chance to heal from their traumatic experiences and rebuild their lives.