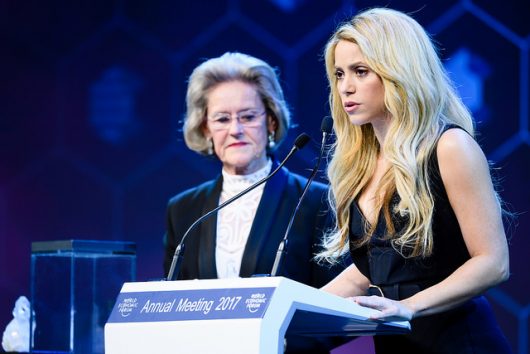 Noting her country’s unrelenting stance on its budget, musician Shakira will be opening her seventh school to provide better education in Colombia for impoverished children.

In 2009, the country’s Education Minister, Cecilia Velez, noted that high school enrollment rose from 400,000 to 700,000 in the past five years. However, it wasn’t always like this. In fact, much of Colombia is still catching up to modern times and is still striving to lower poverty that keeps children out of school.

Approximately 30.6 percent of Colombia’s population lives below the poverty line, and Colombia ranks as the tenth most unequal country in the world. Among those most affected by poverty and inequality are children. In addition, of that 30.6 percent, 42.8 percent are impoverished rural people, while 26.9 percent live in urban areas.

Although Colombia has made great strides over the past few years in reforming education, little has been done to accommodate children in poverty trying to go to school. Students have even resorted to protesting on the streets, demanding a better investment in schools and making education in Colombia a priority.

However, Velez noted that achieving higher quality and more accessible education would take a greater investment by the government, and with a strict budget going toward security and defense rather than education, little can be done.

To combat this budgetary issue, Shakira and her foundation, the Pies Descalzos Foundation, have been building schools around Colombia for nearly 20 years. The singer specifically chooses rural, impoverished areas where the government has little to no involvement to give children the opportunity to attend school. She has already built six schools, and this time she’s focusing on her home, Barranquilla, where 25.7 percent of the town’s population lives below the poverty line.

Teaming up with FC Barcelona and La Caixa Banking Foundation, 1.2 million euros will be donated to build the new school, which will be named “Institución Nuevo Bosque.” The Colombian Ministry of Education and the City of Barranquilla have also volunteered to donate the remaining balance of the project.

Shakira noted that by providing education to children shackled down by their economic status, they are being liberated and having their minds opened to things they could never have imagined. In addition, the singer hopes that the opening of a new school will help provide jobs, security and peace to the conflict-ridden town.

With the construction of her seventh school, set to be finished in 2019, Shakira will be providing education in one of the darkest corners of Colombia.