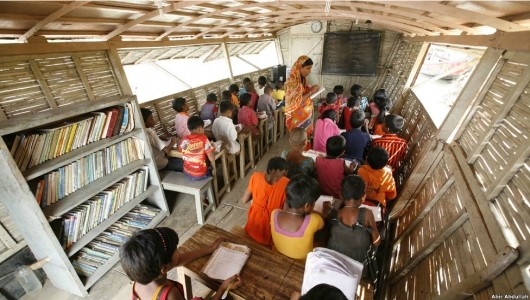 Since 2002, 70,000 children have benefited from Shidhulai Swanirvar Sangstha’s 20 solar-powered floating schools. Bangladesh, a nation plagued by incessant monsoons, often has a disrupted school year. During the rainy season, roads become impassable, closing upwards of 4,000 schools for months at a time.

Global warming is an omnipresent reality in Bangladesh, with climatologists projecting that one-fifth of the nation will be submerged by 2050. Geographically, Bangladesh is acutely sensitive to the effects of climate change, owing to the Bengal delta—the world’s largest glacial melting from the Himalayas—as it runs off into the rivers, raising the sea level, which in turn pushes inland.

Frustrated by the month-long interruptions during his childhood education, Mohammed Rezwan believed there was a more viable solution to Bangladesh’s education woes, so instead of avoiding the floods, he embraced them.

In 1998, Rezwan founded Shidhulai Swanirvar Sangstha, a nonprofit centered on mobile, accessible education, with a mere $500. In 2002, he introduced his first school boat. Then, in 2003, donations started flooding in (pun intended).

From the United States, the Global Fund for Children donated $5,000, followed by $100,000 from the Levi Foundation and, finally, the Bill and Melinda Gates foundation gave $1 million.

The boats are large: stretching 50-feet long and 15-feet wide. Each boat holds roughly 30 to 35 children or adults and is equipped with a laptop, library and other electronic resources. For many of Shidhulai’s students—particularly girls—the school boats are their only opportunity to access technology.

Shidhulai provides three classes, lasting two to three hours a day, six days a week, up to grade four. Students are taught the Bengali alphabet, along with essential life skills, such as how to purify water from contaminated sources. This relatively modest education is all many of these children will ever receive.

Shidhulai’s ultimate gesture of accessibility takes the form of portable lanterns given to each child, who can then study at night from home. The lanterns are low-cost and solar-powered, keeping with the renewable solar energy of the school boats.

The existential question facing Shidhulai is its financial sustainability. Critics claim that, while the school boats are an ingenious form of adaption, they are not sustainable, since solar power requires vast amounts of energy.

Undaunted, Rezwan aspires to open 100 more boats within the next five years, spreading his organization’s reach to roughly 100,000 people.

To boost Shidhulai’s viability, Rezwan plans to rebrand the solar lamps currently used as instructional tools and sell them as hurricane lamps.

“Building on that concept, we plan to sell hurricane lamps for around 500 taka ($7.30) each, and the villagers will have to pay 40 taka (about US $0.60) a month to recharge each lamp on our boats,” said Rezwan.