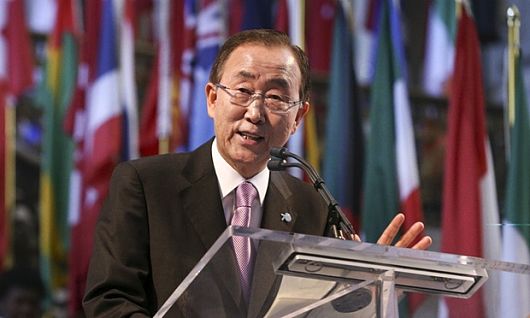 South Korea’s Ban Ki-moon plans to meet the goals set forth by the United Nations in poverty, education, gender equality, child mortality, maternal health, the environment, disease and global partnership by 2030 with the help of many of contributors.

Ki-moon’s plans were introduced at a summit on finance development in Ethiopia’s capital, Addias Abba. The Sustainable Development Goals created by the United Nations will be funded by 100 individual countries in an effort to eliminate global poverty on one accord. This summit was a chance to introduce “a new era of cooperation and global partnership.”

Ki-moon not only encouraged people and countries to invest in bettering people’s future by contributing money towards the cause but also to end corruption in governments in developing countries.

So often, “corruption, smuggling, and inadequate management of valuable natural resources deprive countries” leaving the United Nations to pick up the pieces. Ki-moon proposes “stronger and more inclusive international tax cooperation is fundamental to combat tax avoidance, tax havens and enhance a country’s ability to manage its own economy.”

Not only did Ki-moon urge other countries to invest in the cause, but he also urged private donors because of their large contribution to the global economy.

Perhaps another reason Ki-moon urged civilian investment is because of the large amount of money it will take to make this ambitious project a reality for millions of people.

The goal set forth is going to take trillions of dollars. While this seems like a hefty price tag, it can be accomplished with thoughtful investments from financially stable nations and individuals.

Critics of the plan are urging Ki-moon to provide money and tools for poor countries so that they can maintain their position above poverty. Instead of just giving money to governments, reasonable stipulations can be attached: explicitly designating the money to help those strapped in extreme poverty.

U.N. official Amina Mohammed said “There’s nothing revolutionary about this,” she adds. “It can be done.”

Mind Over (or at Least on Par with) Matter for HIV Patients Arktek: Keeping Vaccines Cool
Scroll to top