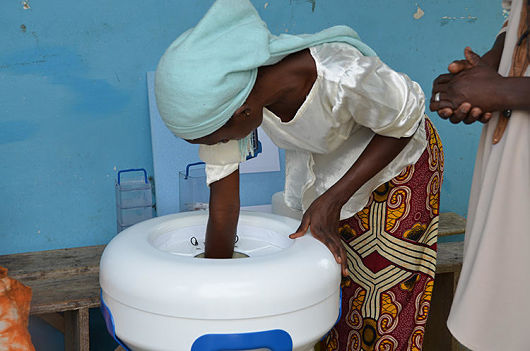 Even in this day and age of technology, there are roughly 1.5 million children who die every year from vaccine-preventable diseases. One of the main reasons is the lack of reliable electricity in developing countries. What if there was a way to keep life-saving vaccines at a cool temperature in places of extremely warm temperatures with no reliable power for months?

This is the challenge Bill Gates presented to Nathan Myhrvold. The result was a thermos model device that looks like a keg and can be easily transported on a motorcycle. Arktek, the Passive Vaccine Storage Device, uses regular ice water and no power, keeping vaccines at a temperature just above freezing for months.

Arktek has just one small battery for the display screen at the top, which has a built-in cell phone to send text messages to alert others if, for example, you are running low on ice. The device was tested in up to 110 degrees Fahrenheit, where it can last 6 to 8 weeks. In a cooler area, it can last for months.

Well, how this is possible, you may ask?

Arktek uses super insulation, similar to what is used for cryogenic fluids, at very low temperatures and to protect spacecraft from extreme temperatures.

The device has already saved millions of lives. It was used in West Africa to transport the experimental Ebola vaccine during the recent outbreak. According to Bill Gates, the current vaccine-preventable disease to focus on is polio, which the Bill & Melinda Gates Foundation hopes to eradicate by 2018. Once polio is conquered, the next vaccine-preventable disease would be malaria.

The device is also practical in countries with reliable power, such as the United States, for the transportation of organs. Currently, organs are transported in hand-held coolers that do not last long very long. Myhrvold states the example that if the organs are not transported within a certain amount of time they will go bad in the current device used. That is when Arktek comes in handy, as a superior alternative method for transporting organs.

Arktek has received awards and recognition for its innovative technology. These include the 2014 Good Design Award in the Humanitarian Category from the Chicago Athenaeum Museum of Architecture & Design and the 2014 ViE Award for the best technological development.

Arktek is the result of Intellectual Ventures’ Global Good Program and Intellectual Ventures Lab. The innovative company is owned by Nathan Myhrvold, former Chief Information Officer at Microsoft. Intellectual Ventures has partnered with AUCMA, China’s largest refrigeration manufacturer, to help distribute these devices to remote areas. This is a partnership that will save millions of lives from vaccine-preventable diseases and potentially result in a healthier future for the world’s poor.