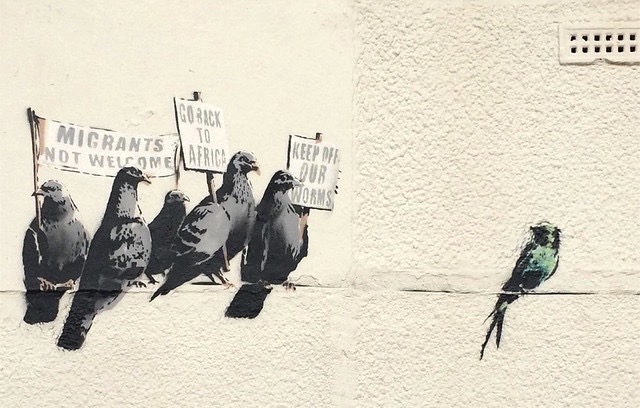 Art has a history of inspiring social change, creating awareness and questioning human nature. The public can infer artists’ thoughts on immigration and social issues through their work.

Approximately 227,316 migrants have entered Europe and 2,920 were reported dead or missing on Mediterranean and African routes in 2016, according to the International Organization for Migration.

Three elite artists have brought issues surrounding immigration to the forefront as tensions continue to increase around the world.

In 2007, Colombian artist Doris Salcedo changed the floor of the Tate modern with her installation piece, Shibboleth. The work is a 548-foot long crack that began very thin and steadily grew wider, ultimately splitting the entire gallery in two.

The crack represents the experience of being an immigrant in Europe and the segregation and discrimination that accompanies it. A wire mesh lines the inside of the crack’s walls, replicating a chain wire fence, which is a common divider along borders.

The name, Shibboleth, holds much significance. It is a word that distinguishes a specific class or social group of those who belong from those who do not belong.

Shibboleth changed the museum space itself, forcing a disruption in the gallery that visitors had to become used to. The piece illustrates in an abstract, but unavoidably literal way, the racism and hatred that divides Europe.

Chinese artist Ai Weiwei created an installation on the Konzerthaus Berlin for the Cinema for Peace Gala on February 15, 2016. He wrapped each of the buildings six columns with over 14,000 life jackets that were salvaged from refugees entering Europe.

This artists’ thoughts on immigration are hard to ignore — the life jacket installation acknowledged the thousands of lives lost in the past year and reminded us of the hardships undergone by those trying to reach safety.

Ai is also known for his political activism. The artist closed his “Ruptures” exhibition in Copenhagen to protest Denmark’s new laws that deter refugees from seeking asylum in January 2016.

The elusive Banksy has also contributed to the ongoing migration discussion with powerful pieces that appeared recently.

One of Banksy’s pieces depicts a girl from Les Misérables emerging from tear gas with a torn French flag in the background. This mural followed reports of French officials entering the camp with tear gas to drive out refugees. The Quick Response (QR) code in the bottom left corner of the mural links to a video of the police raids at the Calais Camp.

The Calais Refugee Camp, also known as “The Jungle,” holds about 7,000 refugees, according to the BBC. Banksy donated wood and supplies from his closed Dismaland “bemusement park” to help build shelters at the refugee camp. The materials were used to build 12 accommodations, a playground and a community center.

Another Banksy mural surfaced on the wall of a tunnel in the Calais Refugee Camp in December 2015. The piece portrays former Apple CEO Steve Jobs carrying an early Apple computer in one hand and holding a bag over his shoulder.

Banksy makes it clear through his work that artists’ thoughts on immigration can make the refugee issue a worldwide conversation.

Highlighting Jobs’ origin as the son of a Syrian migrant, Banksy reminded viewers that, “Apple is the world’s most profitable company, [one that] pays over $7 billion a year in taxes — and it only exists because they allowed in a young man from Homs.”

His statement stands in stark contrast to the popular opinion that accepting refugees will have a negative impact on a country’s economy.

Banksy’s recent murals are part of a new series centered on Europe’s treatment of refugees in the current migration crisis.

Each of the pieces by Salcedo, Ai and Banksy show how artists’ thoughts on immigration can be used as a powerful tool for social awareness. At a critical time of forced movement and migration around the world, an artist’s striking representation of current events and issues promotes empathy and critical thought.

The International Year of Quinoa Continues Beyond 2013Growing Trade: The Uganda-Kenya Grain Partnership
Scroll to top