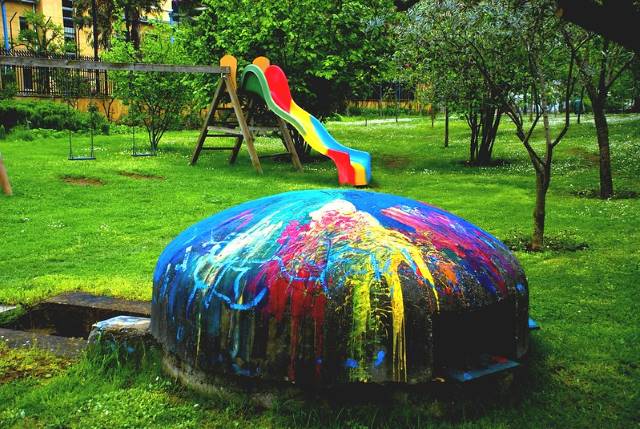 From the 1960s to the 1980s, Albanian dictator Enver Hoxha fortified Albania by building more than 750,000 bunkers in anticipation of an invasion from the Soviet Union, Yugoslavia, Greece and NATO. In the event of an invasion, rather than relying on the services of the army, Hoxha believed that citizens should take up arms and seek refuge in the bunkers scattered across the entire country. The invasion did not occur and Albania’s bunkers, serving no purpose, faced abandonment and decay. Four decades later, Albanians have found a new purpose for them. In addition to individuals using the bunkers for personal needs, the growing tourism industry would facilitate a new use for the abandoned structures.

From 1946 to 1992, Albania was under the rule of a strict communist regime that barred the country from international tourism. Albania’s past significantly tainted the international community’s image of the country. However, in the past two decades, the Albanian government has managed to improve the attractiveness of the country as reflected by the increase in tourists.

Between 2007 and 2017, the number of tourists to Albania increased fivefold from about 1.1 million annual visitors to about 5.2 million annual visitors. The increase was stimulated by direct actions from the government such as fiscal incentives for constructing new hotels in the country as well as concrete development plans advertising the geographic location of the country and its rich cultural heritage. While in 2002 the poverty rate stood at 49.7%, the country made major strides with a poverty rate of 33.8% in 2017.

To earn an income, many Albanians turn to tourism for work. In particular, the free-standing historic bunkers are undergoing refurbishing to serve as house tattoo studios, cafes, restaurants and even accommodations for tourists. In 2012, professors and students from the POLIS University and FH-Mainz in Germany embarked on the Bed & Bunker project to repurpose Albania’s bunkers as bed and breakfast hostels for tourists. The group began this project with the mission of preserving Albania’s heritage, succeeding in raising awareness for this cause.

Albanian-Canadian architect, Elian Stefa, has come up with further step-by-step guides and proposals for revitalizing the bunkers. In other words, people are recognizing the bunkers’ value and transformative plans have already come to fruition while other repurposing plans will soon occur.

The demand for Albania’s bunkers as hotels and service amenities for tourists is growing. Bunkers, as displays of the country’s convoluted but rich history, has helped bring down the unemployment rate and stimulate economic growth in Albania. Between 2014 and 2020, the unemployment rate almost halved, decreasing from 18.06% to 11.7%. Furthermore, the GDP has risen as well with growth from about $12 billion in 2010 to roughly $15.3 billion in 2019. With more people working, Albania was able to decrease its poverty rate to 33.8% in 2017. Furthermore, since the bunkers are scattered throughout the country, the economic growth is not only limited to urban centers, with communities in the countryside also benefiting.

Using History to Serve the Present

Built in the 20th century, Albania’s bunkers were abandoned as the anticipated war they were built for did not manifest. This, however, did not discourage individuals from revitalizing Albania’s bunkers to serve the growing tourism sector. This growth had a positive effect, incentivizing individuals to ensure the preservation of the bunkers and uphold the rich Albanian heritage. Moreover, the resulting increase in revenue from tourism has created new jobs, reducing the poverty rate by 16% in 15 years.

Conservative MPs Against UK Foreign Aid CutsFighting Poverty in Fashion: Brands That Give Back
Scroll to top