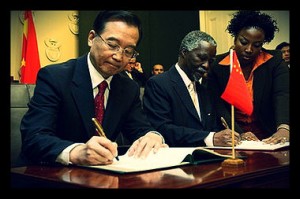 In the past decade, China has committed at least $75 billion to aid and development in Africa. Since 2000, there has been up to 1,700 projects, and China’s commitment to development in Africa stands as one of the strongest of any donor country. Research in the U.S. has created a large public database of these projects, named AidData, in order to analyze China’s efforts.

While this ongoing data collection could create debate over China’s interests in Africa, it is clear that Chinese engagement in the continent strengthened infrastructure, energy generation, and supply and communications. The ability to measure this aid will allow for transparency in China’s aid processes and strategies. Chinese aid is performed through direct investment “without state involvement and NGO aid” so that there is no middleman and the money can go directly where it is needed. However, this makes it more difficult to track where the money goes, and how it is used.

Ghana, Nigeria, and Sudan are the biggest aid recipients, receiving a quarter of a trillion dollars over the past 10 years. As was earlier mentioned, the biggest priority for Chinese aid is infrastructure. This means that empowering women, providing food aid, and creating education systems rank much lower on the priority list. AidData has suggested that because these are areas that the West tends to focus on the most, China has taken a different route.

In spite of this reasoning, according to AidData, China has backed hundreds of health, transport, and agricultural projects. Doctors and teachers have been sent into Africa as well, while African students have been encouraged to study in China. Some insist that China is only interested in the continent for its natural resources, yet it is clear that China is interested in supporting Africa for the future.