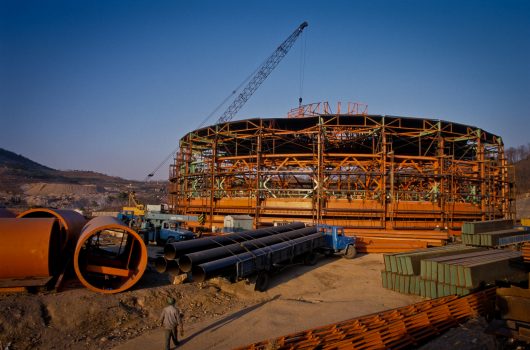 In recent years, five major development projects in China have made significant progress. Consider the proposal for the international Belt and Road Initiative in China, which will not only build trade connections between China and other nations in the world, but also create strategic alliances for military applications. China’s development projects spread outward from the nation to connect it to neighboring countries and continents.

The China Railway Express to Europe is the largest investment project in China’s five-year (2016-2020) plan, with a cost as high as $242 billion. Multiple railways are under construction between China and many cities in Europe, sending freight to London, Madrid and Warsaw, among other cities. Xinhua News Agency has reported that 51 international lines have been laid out from 28 Chinese cities to 29 cities in 11 European countries.

The longest railway service, covering more than 9,000 km, will go from Yiwu, China to Madrid, Spain. Another cross-continent railway connecting Beijing and Moscow will be put into operation in 2025, and it will take 30 hours to make the 7,000 km journey between the two capital cities.

The central government of China aims to improve the network of freight trains in order to deliver products as quickly as possible. Even though the costs of shipping may be higher using this method, analysts predict that China will consolidate its international trade status through these large railway projects.

The second largest of the development projects in China is the China-Pakistan Economic Corridor, costing over $62 billion. This economic corridor involves a series of Chinese investments in Pakistan. The expansion of Gwadar Harbor, one of the most important Chinese investments, will benefit China as it ships its products from western provinces to the Middle East and Africa without having to go through the Strait of Malacca. Gwadar Harbor is also adjacent to the Persian Gulf and as such has the added benefit of being able to import crude oil from the Middle East. The distance overland from Gwadar to Xinjiang is merely 3,000 km.

The next largest investment is China’s Africa project, which has a budget of $13.8 billion. The footsteps of Chinese railways “going global” also reach Africa, and railways in Nairobi and Mombasa are under construction. This plan is part of the future transportation network in East Africa, connecting Uganda, South Sudan, Rwanda and other countries. The network also includes Addis Ababa, the capital city of Ethiopia. China will also finish the construction of a railway connecting Djibouti to Addis Ababa. A U.S. maritime expert regarded this project as a crucial strategic development for China, allowing it to expand its maritime power in Africa.

The fourth-largest of the development projects in China is called the Asian Train Network, with an estimated cost of $13 billion. At least two projects are worthy of global attention. One is the Trans-Asian Railway, which expects to connect Kunming to Laos then extends to Bangkok, Kuala Lumpur and Singapore. Other routes will connect Vietnam, Cambodia and Myanmar. It is expected that the entire transportation network will eventually merge together. The other is the 140 km high-speed railway for Indonesia, connecting the capital city of Jakarta to the third-largest city, Bandung. It has attracted global attention since it is the first overseas high-speed railway project to be built by China.

The fifth-largest ongoing project is the Colombo Harbor in Sri Lanka. China also has a goal of building overseas harbors, since the new Silk Road is not just restricted to the continent. However, there are quite a few voices of opposition in Sri Lanka. While the new government threatened to end Sri Lanka’s dependence on China after it came to power in 2015, due to financial hardships it yielded to practical needs.

There are many more large infrastructure development projects in China that are fast developing. Through these investments, China has shown itself to be a large, strong and friendly nation. China’s goal is to sustain a stable, reliable and healthy economic order, and to reshape the world for a better future.