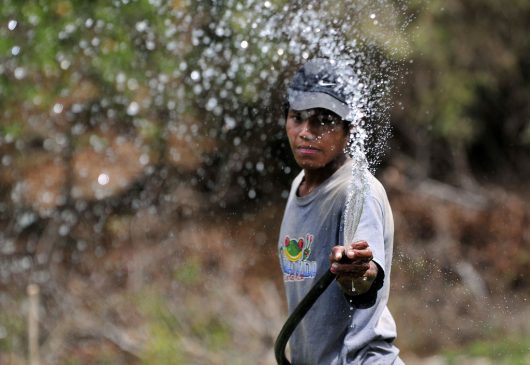 Many communities in Latin America lack access to clean water transported through piped infrastructures and water problems have been the source of much strife. Water in Bolivia made international news in 2000 when the country’s municipalities were privatized, causing costs to skyrocket and leading to four months of violent riots in Cochabamba.

Fortunately, recent movements have been more peaceful. They often take a community approach to change, transforming one neighborhood at a time. Three projects in three different Latin American countries have given communities reliable access to clean water.

Ninety-eight percent of El Salvador’s water is contaminated. A growing movement is working to legislate access to clean water as a human right. In the meantime, one community has taken matters into its own hands.

Sixty percent of Maria Auxiliadora’s population used to lack clean drinking water. People were forced to pay high prices or rely on polluted water, all of which had to be trucked in. Franciscan foundation Tau partnered with the Association Foundation for Cooperation and Common Development in Salvador (CORDES) to change that. The organizations built a safe well that is maintained by the community’s 50 families, each of which has a water meter and pays for the amount it uses.

The arid city of Cochabamba is making headlines again but this time in a positive way. While water transportation in Bolivia has improved, poorer neighborhoods don’t have access to piped water yet. Many are forced to rely on truck deliveries, facing constant shortages and contamination problems. The supply they receive is barely enough for drinking, let alone washing.

In southern Cochabamba, the people of Alto Buena Vista have decided to take matters into their own hands. Following the example of Maria Auxiliadora, El Salvador, they plan to build a well and use a similar metered system.

La Mosquitia’s water sources are also polluted, causing widespread illness. Rain collection only provides relief for a season, and good wells are difficult to build because of contamination and brackish water. Two organizations, Charity: Water and the Arlington Rotary, have been building biosand filters to help. These systems filter water using sand and decomposing organic material. While there is still work to be done, the community’s plight has improved significantly.

While achieving countrywide access to clean water in Bolivia, Honduras and El Salvador is a work in progress, the three communities above are experiencing a better quality of life. Hopefully, they will pave the way for others to trade inefficient and ineffective methods of water transportation for clean and reliable ones.