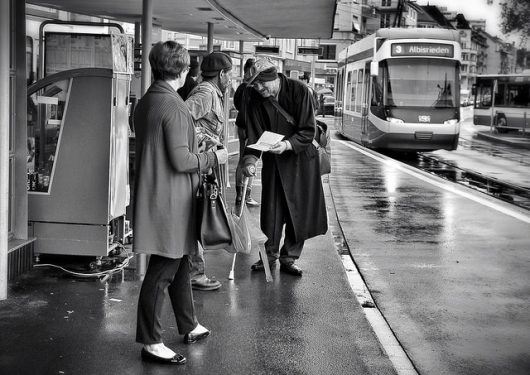 1. One in 13 Swiss Residents Lives Below the Poverty Line.

Switzerland is one of the world’s wealthiest nations. However, data shows that one in 13 residents of Switzerland are still living in poverty. This rate may come as a surprise to many, as Switzerland is often associated with economic stability. By comparison, an estimated one in five residents of Britain lives in poverty, while the average resident of Zurich makes 21 times more per hour than the average resident of Kiev, Ukraine. Switzerland’s poverty rate is significantly lower than nearby European nations, however, 6.6 percent of the Swiss population still lives in poverty.

2. The High Cost of Living Amplifies the Issue.

Residents of Switzerland must account for a high cost of living; food prices and the cost of housing make daily financial needs quite high. Mandatory private health insurance adds further expense. Recent reports show Zurich and Geneva as two of the most expensive cities in the world in terms of cost of living, with certain reports placing the cities above New York City. However, higher incomes in the cities typically offset this cost, with high purchasing power reported. As a result, Zurich and Geneva rank second and third respectively in terms of purchasing power (surpassed only by Luxembourg.)

3. The Poverty Line is Set to Incorporate the Cost of Living.

In order to account for the high cost of living in Switzerland, the poverty rate has been set to incorporate the financial demands of living in the country. For a single person, the poverty line is set as making less than 2,200 francs per month (equal to slightly more than $2,200 in the U.S.) A couple living with two children is considered below the poverty line if earning less than 4,050 francs per month. Poverty in Switzerland is understood as the inability to afford the goods and social services necessary for a healthy and socially integrated life. The Swiss Conference for Social Statistics sets poverty line thresholds based upon meeting those needs.

5. Trial and Error Approach to Solutions, Including Universal Basic Income.

As Switzerland seeks to address the levels of poverty that remain in the country, a referendum was voted on which would have paid each Swiss family a weekly guaranteed income. While the referendum failed in a vote this June, it represents an innovation in seeking solutions to poverty. Switzerland is the first country to consider a solution of this kind. Some consider the failure an important step, nonetheless, as it provides a platform for discussing the meaning of basic income.

6. Wages and Income Can Be Quite High in Relation to European Neighbors.

Incomes in Swiss cities are often quite high, with the average resident of Zurich earning $41 per hour or more. This level of earning is often what leads to the association of Switzerland with a lifestyle of security and contributes to offsetting high costs of living. However, for the 6.6% of Swiss residents who do live in poverty, keeping up with city living costs (dependent on similar wages) can lead to a daily struggle.

7. Poverty in Switzerland is Decreasing.

The good news for addressing poverty in Switzerland is a recent decrease in the number of those living in poverty. Since 2007, rates have decreased from 9.3% to 6.6%.

Assessing poverty in Switzerland demonstrates the importance of not allowing a minority impoverished population to go overlooked. The country’s innovative and consistent efforts to address poverty represent a democratic model for the discussion surrounding poverty in developed nations.