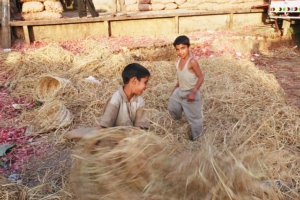 Forcing children to take part in often dangerous and strenuous work and preventing them from attending school, child labor stands in the way of a child’s healthy physical and mental development in addition to his or her education.

In some cases children are enslaved laborers, engaged in the agricultural, mining and manufacturing sectors, or in domestic service, subsequently pushed into homelessness and living on the streets. However, others are trafficked and enslaved in prostitution, or forced into armed combat as child soldiers. These are all forms of child labor; the latter qualifying as some of the worst forms of child labor given that such bondage is especially harmful and in direct violation of a child’s human rights. Child labor is a continuing global phenomenon and following are some shocking, but important, facts regarding the practice.

So why are some children forced into labor?

Poverty is the most often cited reason why children work. Pressured to provide food and shelter, as well as to pay off debt owed by the parents, some children have no other choice but to become involved in labor in order to support their families. However, some children are sold against their will and forced into slavery. Other factors that influence whether children work or not include barriers to education and inadequate enforcement of legislation protecting children.

Child labor is a complex issue, as are the solutions, but the following steps must continue to be pushed for in order to see further progress. First and foremost, child labor laws must be enforced. Another strategy would be to reduce poverty in these areas so as to limit the need for children to be forced into these situations. Finally, providing access to quality education ensures that each child has a chance for a better future.