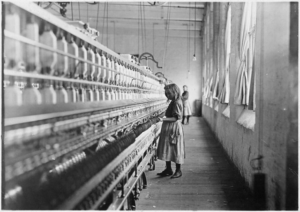 Children have always been a source of cheap labor, and the United States is no exception. This article recounts the history of child labor in the United States, and the steps taken to fight against its practice.

A History of Child Labor in the United States

In the colonial period, child labor was commonplace. Children were expected to assist their parents and work on the family farm. Young boys (ages 10-14) later became apprentices in different trades.

The Industrial Revolution, however, marked a new level of intensity for young workers. Children spent all day in factories with poor and dangerous conditions. Their small size allowed them to climb in and out of old factory machines. In addition to factory work, some employers used children in mines. These young workers were preferred because they were easy to control and direct. Salaries for children were also much less than those for adult workers. The large influx of immigrants into the United States in the mid 1800s led to an additional increase in child labor.

The most common reason for child labor in the United States during the Industrial Revolution was to support the family. Instead of going to school, children went to work in factories. During the nineteenth century some attempts were made to reform child labor laws and improve general working conditions. Education reformers promoted the idea that getting a primary school education was necessary to achieve self-advancement and a stronger nation. As a result, a number of states began to implement minimum wage and school attendance laws. However, they contained many loopholes and were rarely enforced.

American reformers have been actively working to fight child labor in the United States since the early 1900s. In 1904, the National Child Labor Committee was established. Along with smaller state child labor committees, the national chapter adopted a policy of “mass political action”–research reports, investigations by experts, dramatic photographs depicting oppressed children in factories, active lobbying, pamphlets, mass mailings and leaflets. However, progress was slow and often frustrating.

Committees identified state legislatures as the best vehicle to achieve reform. During the Progressive Era, many state laws regulating child labor were passed. Due to resistance from the southern states, federal child labor bills were later passed through Congress in 1916 and 1918. However, the Supreme Court ruled that they were unconstitutional.

Reformers decided to lobby for an amendment that would permit the government to pass a federal child labor law. The proposed amendment was passed through Congress in 1924, but several states failed to ratify it because of the conservative political environment at the time. Once the Great Depression hit America in the 1930s, child labor nearly disappeared as all the jobs went to adults instead of children. The National Industrial Recovery Act further placed regulations on child labor, and the Fair Labor Standards Act set federal minimum wage and maximum work hours. Children under 16 were not permitted to work in the manufacturing and mining sectors.

Due to the advancements in factory technology and the increase in required years of schooling, the issue of child labor has become largely insignificant. Violations of child labor laws still occur today, but the United States has definitely come a long way – “one of the more remarkable changes in the social and economic life of the nation over the last two centuries.”

Given its own struggle with child labor, the United States has taken action to end it abroad through initiatives like the Office of Child Labor, Forced Labor, and Human Trafficking (OCFT) – a division of the U.S. Department of Labor’s Bureau of International Labor Affairs (ILAB). The OCFT was founded in 1993 as part of a congressional request to investigate and report on child labor practices around the world. Using research conducted by the OCFT, ILAB maintains a list of international goods produced by child labor or forced labor: fireworks from China, corn from Bolivia, bricks from Burma, carpets from India, garments from Argentina and more. In addition to publishing reports like “Findings on the Worst Forms of Child Labor,” the OCFT assists with the development of labor legislation and supports relevant projects; so far, more than 270 projects have been funded, benefiting children in over 90 countries. Through the OCFT, the United States hopes to collaborate with other nations in order to strengthen the enforcement of child labor laws and raise global awareness of the issue.