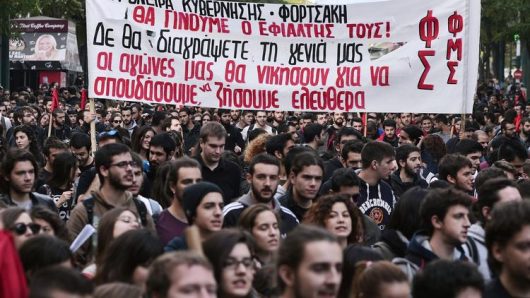 The youth unemployment rate in Greece has reached tremendously high levels and is resulting in the growth of poverty among young Greeks, in addition to stunting the development of the Greek economy. As of May 2017, the youth unemployment rate in Greece reached a staggering 46 percent. This rate means that roughly half of the Greek youth population are unable to find employment opportunities.

Looking at the high rate of youth unemployment, one factor can be seen as its primary cause: Greek debt.

In 2011, due to its ballooning debt levels and fears that Greece would default on its debt, European counterparts were forced to give Greece a bailout package of €109 billion. As part of the loan, however, major credit rating agencies gave Greece a rating along with a disclaimer saying there would be a substantial risk of default on Greek debt.

By giving Greece this rating, the country pushed away potential investors in the Greek economy, and, in combination with the effects of Greek austerity programs, substantially hurt the growth potential of the Greek economy. The adverse effects observed in Greece are exemplified by the fact that the country’s economy has contracted by a quarter since the crisis began.

The minimum wage in Greece is calculated differently for younger people than it is for people over 30, so young Greeks who have a job are often paid at a significantly lower rate than older workers.

As an overall effect on poverty in Greece, the high youth unemployment rate will very obviously impact the country and raise its poverty rate. As the Greek economy continues to deteriorate and young people continue to go without opportunities to work, the poverty rate in the country will inevitably grow.

Going hand-in-hand with the increase in the rate of poverty among young people in Greece is the level of youth homelessness. As the unemployment rate continues to climb, the rate of homelessness among Greek youth – in addition to the rate of substance abuse – both continue to rise.

Overall, the youth unemployment rate in Greece is elevating enough to become a significant issue requiring foreign assistance to resolve. As countries capable of proving support, the United States and Greece’s European counterparts must increase aid to help Greece combat this problem. By focusing efforts on increasing the success of the Greek economy, issues such as youth unemployment will certainly begin seeing improvement.

What are the Common Diseases in Bhutan? Egypt’s Rate of Poverty and Government Assistance
Scroll to top